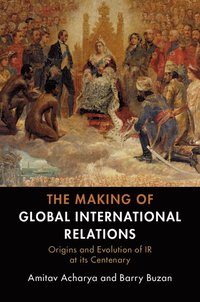 The Making of Global International Relations

Origins and Evolution of IR at its Centenary

av Amitav Acharya
Häftad Engelska, 2019-02-14
341
Köp
Spara som favorit
Finns även som
Visa alla 3 format & utgåvor
This book presents a challenge to the discipline of international relations (IR) to rethink itself, in the light of both its own modern origins, and the two centuries of world history that have shaped it. By tracking the development of thinking about IR, and the practice of world politics, this book shows how they relate to each other across five time periods from nineteenth-century colonialism, through two world wars, the Cold War and decolonization, to twenty-first-century globalization. It gives equal weight to both the neglected voices and histories of the Global South, and the traditionally dominant perspectives of the West, showing how they have moved from nearly complete separation to the beginnings of significant integration. The authors argue that IR needs to continue this globalizing movement if it is to cope with the rapidly emerging post-Western world order, with its more diffuse distribution of wealth, power and cultural authority.
Visa hela texten

'A most comprehensive retelling of the IR discipline, a critical review of the disciplinary development, and a ground-breaking forerunner for a genuine global IR project. Acharya and Buzan present not only an inspiring textbook at IR's centenary, but also a must-read for all interested in a more inclusive and forward-looking study of world politics and global international society.' Yaqing Qin, China Foreign Affairs University

'Acharya and Buzan issue a clarion call for a truly self-reflective and reflexive discipline, based on a rare, balanced account of international relations. An important and urgent read for all IR scholars who wish to study and explain the real world, at a time when international society is becoming at once more globalandless easily generalisable.' Evelyn Goh, Shedden Professor of Strategic Policy Studies, Australian National University

Amitav Acharyais Distinguished Professor at the School of International Service, American University, Washington DC. His recent books include Constructing Global Order (Cambridge, 2018) and The End of American World Order (2014). His previous book with Barry Buzan is Non-Western International Relations Theory: Perspectives on and Beyond Asia (2010). He is the recipient of the 2015 Distinguished Scholar Award from ISA's Global South Caucus and the 2018 International Organization Section award. Barry Buzan is Emeritus Professor in the London School of Economics and Political Science Department of International Relations, Honorary Professor at Copenhagen, Jilin, and China Foreign Affairs Universities, and a Fellow of the British Academy. His recent books include Global International Society, with Laust Schouenborg (Cambridge, 2018), and The Global Transformation, with George Lawson, (Cambridge, 2015) which won the 2017 Francesco Guicciardini Prize for Best Book in Historical International Relations.