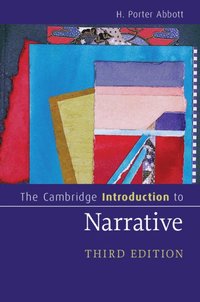 The Cambridge Introduction to Narrative

av H Porter Abbott
Häftad Engelska, 2020-12-03
299
Köp
Spara som favorit
Finns även som
Visa alla 5 format & utgåvor
What is narrative? How does it work and how does it shape our lives? H. Porter Abbott emphasizes that narrative is found not just in literature, film, and theatre, but everywhere in the ordinary course of people's lives. This widely used introduction, now revised and expanded in its third edition, is informed throughout by recent developments in the field and includes one new chapter. The glossary and bibliography have been expanded, and new sections explore unnatural narrative, retrograde narrative, reader-resistant narratives, intermedial narrative, narrativity, and multiple interpretation. With its lucid exposition of concepts, and suggestions for further reading, this book is not only an excellent introduction for courses focused on narrative but also an invaluable resource for students and scholars across a wide range of fields, including literature and drama, film and media, society and politics, journalism, autobiography, history, and still others throughout the arts, humanities, and social sciences.
Visa hela texten

Praise for the second edition: 'This second edition of H. Porter Abbott's very widely used (and highly regarded) Introduction is even stronger than the first edition. The new edition includes two additional chapters, one on 'Narrative and Truth' and the other on 'Narrative Worlds,' which incorporate recent research by a range of scholars exploring the relevant issues, and, furthermore, the author has painstakingly reworked the entire volume to ensure accuracy, comprehensiveness, and clarity in its treatment of major trends in the study of narrative ... What was true of the first edition is even more true of the second: this Introduction is not only an appropriate text for classes focusing on narrative - including advanced undergraduate and graduate classes in such (sub)disciplines as literary theory, film theory, communication studies, discourse analysis, women's and gender studies, history, comparative media studies, and critical legal theory - but also an invaluable resource for specialists.' David Herman, editor of The Cambridge Companion to Narrative

Praise for the first edition: 'Abbott brilliantly zeroes in on the architecture of narrative with an exactness and bent for orderly exposition that utterly redeems his subject.' The Chronicle of Higher Education

Praise for the first edition: 'Anyone seeking a lucidly written guide to the study of narrative technique should turn immediately to H. Porter Abbott's Cambridge Introduction to Narrative.' Literature/Film Quarterly

Praise for the first edition: 'Directness, accessibility, and coherence distinguish this brief but comprehensive study of narrative ... Most highly recommended.' Choice

Praise for the first edition: 'A lucid, practical, wide-ranging, and often original introduction to narrative, which will be extremely useful in undergraduate and graduate courses on literary theory and criticism. This is not a dry textbook, however; the reader is made aware of a real voice and of a fascination with the role of narrative across many areas of culture and beyond.' Derek Attridge, University of York

A specialist in narrative, autobiography, modernism, and nineteenth- and twentieth-century literature, H. Porter Abbott is an internationally recognized scholar in the field of narrative and the work of Samuel Beckett.He taught at the University of California, Santa Barbara, from 1966 to 2005, with stints as Chair of English and Acting Dean of Arts and Humanities, and continues as Research Professor Emeritus.