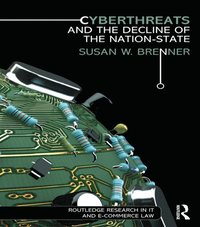 Cyberthreats and the Decline of the Nation-State E-bok

av Susan W Brenner
E-bok (PDF - DRM), Engelska, 2014-03-14
469
Ladda ned
Spara som favorit
Laddas ned direkt
Läs i vår app för iPhone och iPad
Finns även som
Visa alla 3 format & utgåvor
This book explores the extraordinary difficulties a nation-state's law enforcement and military face in attempting to prevent cyber-attacks. In the wake of recent assaults including the denial of service attack on Estonia in 2007 and the widespread use of the Zeus Trojan Horse software, Susan W. Brenner explores how traditional categories and procedures inherent in law enforcement and military agencies can obstruct efforts to respond to cyberthreats. Brenner argues that the use of a territorially-based system of sovereignty to combat cyberthreats is ineffective, as cyberspace erodes the import of territory. This problem is compounded by the nature of cybercrime as a continually evolving phenomenon driven by rapid and complex technological change.Following an evaluation of the efficacy of the nation-state, the book goes on to explore how individuals and corporations could be integrated into a more decentralized, distributed system of cyberthreat control. Looking at initiatives in Estonia and Sweden which have attempted to incorporate civilians into their cyber-response efforts, Brenner suggests that civilian involvement may mediate the rigid hierarchies that exist among formal agencies and increase the flexibility of any response. This book will be of great interest to students and researchers of information technological law and security studies.
Visa hela texten