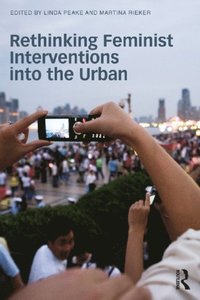 av Linda Peake, Martina Rieker
E-bok (EPUB - DRM), Engelska, 2013-05-29
590
Ladda ned
Spara som favorit
Laddas ned direkt
Läs i vår app för iPhone och iPad
Finns även som
Visa alla 3 format & utgåvor
In Rethinking Feminist Interventions into the Urban, Linda Peake and Martina Rieker embark on an ambitious project to explore the extent to which a feminist re-imagining of the twenty-first century city can form the core of a new emerging analytic of women and the neoliberal urban.In a world in which the majority of the population now live in urban centres, they take as their starting point the need to examine the production of knowledge about the city through the problematic divide of the global north and south, asking what might a feminist intervention, a position itself fraught with possibilities and problems, into this dominant geographical imaginary look like. Providing a meaningful discussion of the ways in which feminism, gender and women have been understood in relation to the city and urban studies, they ask probing and insightful questions that indicate new directions for theory and research, illustrating the necessity of a re-formulation of the north-south divide as a critical and urgent project for feminist urban studies.Working through platforms as diverse as policy formulations and telling stories, the contributors to the book come from a range of disciplinary backgrounds and geographic locations ranging through the Caribbean, North America, Western Europe, South, East and South East Asia, the Middle East and Latin America. They identify a range of issues (such as care, work, violence, the household, mobility, intimacy and poverty) that they analytically address to make sense of and reanimate resistance to the contemporary urban through articulations of new grammars of gendered geographies of justice.
Visa hela texten