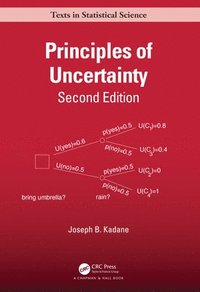 av Joseph B Kadane
Inbunden Engelska, 2020-08-26
1553
Köp
Spara som favorit
Finns även som
Visa alla 3 format & utgåvor
Praise for the first edition: Principles of Uncertainty is a profound and mesmerising book on the foundations and principles of subjectivist or behaviouristic Bayesian analysis. ... the book is a pleasure to read. And highly recommended for teaching as it can be used at many different levels. ... A must-read for sure!-Christian Robert, CHANCEIt's a lovely book, one that I hope will be widely adopted as a course textbook. -Michael Jordan, University of California, Berkeley, USA Like the prize-winning first edition, Principles of Uncertainty, Second Edition is an accessible, comprehensive text on the theory of Bayesian Statistics written in an appealing, inviting style, and packed with interesting examples. It presents an introduction to the subjective Bayesian approach which has played a pivotal role in game theory, economics, and the recent boom in Markov Chain Monte Carlo methods. This new edition has been updated throughout and features new material on Nonparametric Bayesian Methods, the Dirichlet distribution, a simple proof of the central limit theorem, and new problems. Key Features: First edition won the 2011 DeGroot Prize Well-written introduction to theory of Bayesian statistics Each of the introductory chapters begins by introducing one new concept or assumption Uses "just-in-time mathematics"-the introduction to mathematical ideas just before they are applied
Visa hela texten

Joseph B. Kadane (born January 10, 1941) is the Leonard J. Savage University Professor of Statistics, Emeritus in the Department of Statistics and Social and Decision Sciences at Carnegie Mellon University. He is one of the early proponents of Bayesian statistics, particularly the subjective Bayesian philosophy. Born in Washington, DC and raised in Freeport on Long Island, Kadane (known as Jay), prepared at Phillips Exeter Academy, earned an A.B. in mathematics from Harvard College and a Ph.D. in statistics from Stanford in 1966, under the supervision of Professor Herman Chernoff. While in graduate school, Jay worked for the Center for Naval Analyses (CNA). Upon finishing, he accepted a joint appointment at the Yale statistics department and the Cowles Foundation. In 1968 he left Yale and served as an analyst at CNA for three years. In 1971, Jay moved to Pittsburgh to join Morris H. DeGroot at Carnegie Mellon University. He became the second tenured professor in the Department of Statistics. Jay served as department head from 1972-1981 and steered the department to a balance between theoretical and applied work, advocating that statisticians should engage in joint research in substantive areas rather than acting as consultants.Jay's contributions span a wide range of fields: econometrics, law, medicine, political science, sociology, computer science (see maximum subarray problem), archaeology, and environmental science, among others. Among many honors, Jay has been elected as a Fellow of the American Academy of Arts and Sciences, a fellow of the American Association for the Advancement of Science, a fellow of the American Statistical Association, and a fellow of the Institute of Mathematical Statistics. He has authored over 250 peer-reviewed publications and has served the statistical community in many capacities, including as editor of the Journal of the American Statistical Association from 1983-85.