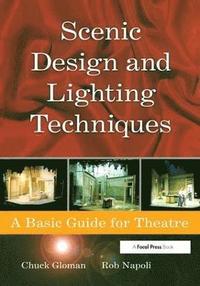 A Basic Guide for Theatre

av Chuck Gloman, Rob Napoli
Inbunden Engelska, 2016-04-11
1701
Köp
Spara som favorit
Basic. This is the key word in Scenic Design and Lighting Tecniques: A Basic Guide for Theatre, written by two seasoned professionals with over twenty years of experience. This book is designed to show you how to turn a bare stage into a basic set design, without using heavy language that would bog you down. From materials and construction to basic props and lighting, this book explains all you will need to know to build your set and light it.
Visa hela texten

Rob Napoli has worked in the field of technical theatre for over 20 years as a professional freelance carpenter, prop master, technical director, production manager, and designer. He holds an MFA in Theatre from Catholic University and a BA in Theatre from St. Vincent College and has been an adjunct professor at the Department of Performing and Fine Arts at DeSales University in Pennsylvania. Currently, he is the Designer and Technical Director at Penn State Berks. An independent producer, videographer/director of videography, and editor with experience in all areas of video, from corporate training to television commercials. His articles appear regularly in Videography, Television Broadcast, TV Technology, Mix, and Government Video. He is a member of the Television/Film faculty at DeSales University in Pennsylvania.

*SECTION 1, BUILDING THE SET: What do I need? The Building Blocks of a Scenic Design; What are they made of? Scenic Construction Materials; What tools do I use? Scence Shop Tools and Techniques; How do I assemble it? Building the Building Blocks; *SECTION 2, CREATING THE ENVIRONMENT: What do I need? Interpreting the Script for its Basic Scenic Needs; What should it look like? Creating the World of the Script; How do I get them to build it? Communicating Your Ideas; How do I get them to believe it? Adding Realistic Details; How does this all come together? Summary; *SECTION 3, LIGHTING THE SET: The Basics of Light; Special Effects Lighting