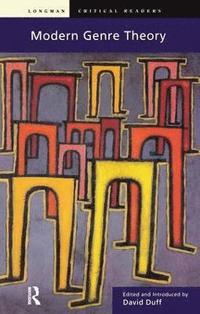 av David Duff
Inbunden Engelska, 2016-03-31
1657
Köp
Spara som favorit
Finns även som
Visa alla 1 format & utgåvor
Since Aristotle, genre has been one of the fundamental concepts of literary theory, and much of the world's literature and criticism has been shaped by ideas about the nature, function and value of literary genres. Modern developments in critical theory, however, prompted in part by the iconoclastic practices of modern writers and the emergence of new media such as film and television, have put in question traditional categories, and challenged the assumptions on which earlier genre theory was based. This has led not just to a reinterpretation of individual genres and the development of new classifications, but also to a radically new understanding of such key topics as the mixing and evolution of genres, generic hierarchies and genre-systems, the politics and sociology of genres, and the relations between genre and gender. This anthology, the first of its kind in English, charts these fascinating developments. Through judicious selections from major twentieth-century genre theorists including Yury Tynyanov, Vladimir Propp, Mikhail Bakhtin, Hans Robert Jauss, Rosalie Colie, Fredric Jameson, Tzvetan Todorov, Gerard Genette and Jacques Derrida, it demonstrates the central role that notions of genre have played in Russian Formalism, structuralism and post-structuralism, reception theory, and various modes of historical criticism. Each essay is accompanied by a detailed headnote, and the volume opens with a lucid introduction emphasising the international and interdisciplinary character of modern debates about genre. Also included are an annotated bibliography and a glossary of key terms, making this an indispensable resource for students and anyone interested in genre studies or literary theory.
Visa hela texten

David Duff is Lecturer in English at the University of Aberdeen and previously taught at the universities of Gdansk and Torun, Poland.