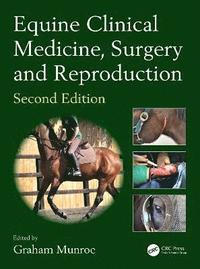 av Graham Munroe
Inbunden Engelska, 2019-12-20
2518
Köp
Spara som favorit
Finns även som
Visa alla 3 format & utgåvor
This fully-revised new edition of the best-selling Equine Clinical Medicine, Surgery and Reproduction is supported by over 1800 illustrations of the highest quality: colour photographs, diagnostic images including MRI and CT, and diagrams. System-based, the chapters introduce each individual system with precise information on the relevant basic anatomy and physiology, standard clinical examination techniques and useful differential diagnostic aids. This is followed by diseases and disorders that are pertinent to that system, grouped together either anatomically or based on presenting clinical signs. Each condition is described using consistent headings: definition/overview, etiology and pathophysiology, clinical presentation, diagnosis, differential diagnoses, management/treatment, and prognosis. Additional chapters deal with the foal and wounds. New to the second edition: - All chapters are updated throughout - Additional chapters on the axial musculoskeletal system (neck, back and pelvis) and muscle diseases and problems - A whole new section on soft tissue injuries of the foot - More information on diagnostic tests including over-ground endoscopy, chest and liver ultrasonography, head CT, and foot MRI - Material on equine dentistry, neurology, endocrine system, the foal, and the liver has been considerably expanded - All illustrations and photographs have been reviewed and many replaced with higher quality images. The focus throughout remains on providing clinically relevant information required for practical case management, plus sufficient background on causes and disease processes to enable readers to understand the conditions and the rationale for diagnostic and treatment options. An international group of respected clinicians have come together under the editorship of Dr Graham Munroe to create a textbook that will be of lasting value as a teaching and training resource for equine clinical teachers and their students in veterinary medicine and related equine courses, as well as a ready reference for non-specialist mixed or equine clinical practitioners
Visa hela texten

Graham Munroe qualified from the University of Bristol with Honours in 1979. He then spent 8 years in equine practice in Wendover, Newmarket, Arundel, and Oxfordshire including a stud season in New Zealand. Whilst in practice Graham studied for and gained a Certificate in Orthopaedics (CertEO) and a Diploma in Stud Medicine (DESM) from the Royal College of Veterinary Surgeons. In 1987 he became a Lecturer in Equine Surgery and Reproduction at Glasgow University. Whilst at Glasgow, Graham obtained a PhD by thesis on Neonatal Foal Ophthalmology and a Fellowship of the RCVS by examination in 1994. Graham then joined the University of Edinburgh as a Senior Lecturer in Large animal surgery in 1994. In 1997 he became a member of the European College of Veterinary Surgeons (ECVS) by examination. He then set up a private equine consultancy practice based on the Scottish Borders in 1998 and currently consults in clinics in Scotland and northern England, and occasionally in Europe. He has furthermore been a Visiting University Equine Surgeon at Cambridge Veterinary School from 2007-2009 and in 2011. Graham is interested in all areas of Surgery esp. Orthopaedics and General Soft Tissue Surgery. His interests however also include Diagnostic Imaging and Ophthalmology. Graham has been lecturing extensively across the UK and also in Europe and is an Editor for Equus Vetstream. Graham has published over 60 referred papers and book chapters and is one of the editors of the book 'Clinical Equine Medicine, Surgery and Reproduction'. He has furthermore been the team vet for the British Driving Team from 1994-2000 and for the British Dressage and British Vaulting Teams in 2002. Graham was also a FEI veterinary delegate at the Athens 2004 Olympics.