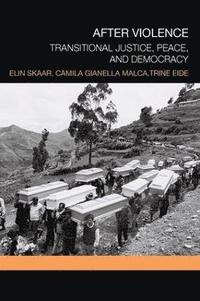 av Elin Skaar, Camila Gianella Malca, Trine Eide
Häftad Engelska, 2016-11-08
566
Köp
Spara som favorit
Finns även som
Visa alla 3 format & utgåvor
After Violence: Transitional Justice, Peace, and Democracy examines the effects of transitional justice on the development of peace and democracy. Anticipated contributions of transitional justice mechanisms are commonly stated in universal terms, with little regard for historically specific contexts. Yet a truth commission, for example, will not have the same function in a society torn by long-term civil war or genocide as in a society emerging from authoritarian repression. Addressing trials, reparations, truth commissions, and amnesties, the book systematically addresses the experiences of four very different contemporary transitional justice cases: post-authoritarian Uruguay and Peru and post-conflict Rwanda and Angola. Its analysis demonstrates that context is a crucial determinant of the impact of transitional justice processes, and identifies specific contextual obstacles and limitations to these processes. The book will be of much interest to scholars in the fields of transitional justice and peacebuilding, as well as students generally concerned with human rights and democratisation.
Visa hela texten

"After Violence is a serious attempt to isolate the impact of transitional justice, written by experts possessing a profound sensitivity to historical context. I recommend it for all scholars who are truly grappling with the difficulty of assessing the contribution transitional justice has made in the world." - Geoffrey T. Dancy, Professor of Political Science, Tulane University "The volume is recommended to scholars interested in peacebuilding, human rights and democratisation because it presents comparative approach towards transitional justice, peace and democracy, quality depiction of the research field as well as worth verifying inventive explanatory frameworks." - Joanna Rak, Nicolaus Copernicus University in Torun, Poland

Elin Skaar is a senior researcher and head of the research cluster on Rights and Legal Institutions at the Chr. Michelsen Institute (CMI) in Bergen, Norway. She is currently co-editing a volume titled Reconceptualizing Transitional Justice: The Latin American experience, which is due to be published by Routledge in 2015. Camila Gianella Malca is a postdoctoral scholar at the University of Bergen and a researcher at the Chr. Michelsen Institute (CMI) in Bergen, Norway. Her research and consultancy work has focused on maternal mortality, the right to health, HIV/AIDS, tuberculosis, mental health, and transitional justice. Trine Eide is a PhD candidate in social anthropology at the Arctic University of Norway (formerly University of Tromso). Her dissertation focuses on the Twa people in the peacebuilding process in Rwanda. She has spent two years following the Rwandan community court (gacaca) processes, and has published on human rights, ethnic conflict, and development. Astri Suhrke is a senior researcher at the Chr. Michelsen Institute (CMI) in Bergen, Norway, and has written widely on social conflict and peacebuilding. Her most recent books are The Peace In Between: Post-war Violence and Peacebuilding (Routledge, 2012, with Mats Berdal) and When More Is Less: The International Project in Afghanistan (Hurst, 2011).