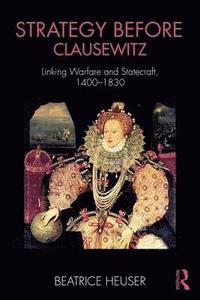 av Beatrice Heuser
Häftad Engelska, 2017-08-01
565
Köp
Spara som favorit
Finns även som
Visa alla 3 format & utgåvor
This collection of essays combines historical research with cutting-edge strategic analysis and makes a significant contribution to the study of the early history of strategic thinking. There is a debate as to whether strategy in its modern definition existed before Napoleon and Clausewitz. The case studies featured in this book show that strategic thinking did indeed exist before the last century, and that there was strategy making, even if there was no commonly agreed word for it. The volume uses a variety of approaches. First, it explores the strategy making of three monarchs whose biographers have claimed to have identified strategic reasoning in their warfare: Edward III of England, Philip II of Spain and Louis XIV of France. The book then analyses a number of famous strategic thinkers and practitioners, including Christine de Pizan, Lazarus Schwendi, Matthew Sutcliffe, Raimondo Montecuccoli and Count Guibert, concluding with the ideas that Clausewitz derived from other authors. Several chapters deal with reflections on naval strategy long thought not to have existed before the nineteenth century. Combining in-depth historical documentary research with strategic analysis, the book illustrates that despite social, economic, political, cultural and linguistic differences, our forebears connected warfare and the aims and considerations of statecraft just as we do today. This book will be of great interest to students of strategic history and theory, military history and IR in general.
Visa hela texten

'Strategy is a word of comparatively recent origin but Beatrice Heuser shows us that 'strategic thinking' about the role of military force in the achievement of state policies long preceded the great 19th Century masters of military thought. Her writing is accessible, even entertaining, her scholarship impeccable. Properly to understand Mahan, Corbett and the rest of them we need to know who and what came before them to supply the foundations on which they built. Thanks to Beatrice Heuser, we now do.' -- Geoffrey Till, King's College London, UK 'Beatrice Heuser's excellent new book shows that - historically - there was strategy before "strategy" both in theory and practice, across the boundaries of time, space and even gender. Heuser illustrates the richness and wisdom of thinking about war before strategy became tragically dominated by the pursuit of military victory at all cost. This book should be read by all who wish to understand how the world we live in today came into being and, in particular, by those who want to make sure that we have a world to live in tomorrow.' -- Brendan Simms, University of Cambridge, UK 'In this boldly innovative collection of essays, Beatrice Heuser challenges us to reconsider the notion that military strategy was of little consequence before the modern era. She shows how there was considerable evidence of strategic awareness in earlier periods, whether in the use made of dynastic marriages, the prioritizing of diplomatic goals, or the allocation of financial and technological resources in the pursuit of war. And she insists that Europe boasted a long tradition of strategic thinking long before Clausewitz, citing authors from Christine de Pizan to Guibert. It was, the book argues, a tradition to which Clausewitz himself belonged: as the final essay shows, he had read many of these works and fully understood their import.' -- Alan Forrest, University of York, UK 'The book benefits students of security studies, political science, and history immensely. Besides the academic arena, Heuser's book also serves as an informative and interesting read for practitioners of diplomacy. The book greatly assists in understanding the beginning of modern maritime strategies and the idea of sea power. It also gives an earlier take on the idea of just war as Pizan has mentioned in her works. The significance of the book lies in the extensive study that can be seen in the detailed narrative of the book.'--Shayesta Nishat Ahmed, Strategic Studies Quarterly

Beatrice Heuser is Professor of International Relations at the University of Glasgow, Scotland, and currently a visiting professor at the Sorbonne and at Sciences Po in Paris. She is the author of many books, including The Evolution of Strategy (2010) and Reading Clausewitz (2002).

Preface 1. Was Strategy Practised before the Word was Used? 2. Christine de Pizan, the first Modern Strategist: Good Governance and Conflict Mediation 3. The Military Revolution as seen by Contemporaries 4. The Invention of Modern Maritime Strategies: The Anglo-Spanish War of 1585-1604 5. A National Security Strategy for England: Matthew Sutcliffe, the Earl of Essex, and the Cadiz Expedition of 1596 6. Command of the Sea: the Origins of a Strategic Concept 7. Lazarus Schwendi, Raimondo Montecuccoli and the Turkish Wars: Peaceful Coexistence or Roll-Back? 8. Guibert: Prophet of Total War? 9. What Clausewitz Read: On the Origins of some of his Key Ideas