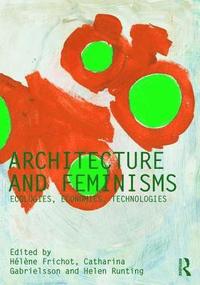 av Helene Frichot, Catharina Gabrielsson, Helen Runting
Inbunden Engelska, 2017-11-07
1629
Köp
Spara som favorit
Finns även som
Visa alla 3 format & utgåvor
Set against the background of a 'general crisis' that is environmental, political and social, this book examines a series of specific intersections between architecture and feminisms, understood in the plural. The collected essays and projects that make up the book follow transversal trajectories that criss-cross between ecologies, economies and technologies, exploring specific cases and positions in relation to the themes of the archive, control, work and milieu. This collective intellectual labour can be located amidst a worldwide depletion of material resources, a hollowing out of political power and the degradation of constructed and natural environments. Feminist positions suggest ways of ethically coping with a world that is becoming increasingly unstable and contested. The many voices gathered here are united by the task of putting critical concepts and feminist design tools to use in order to offer experimental approaches to the creation of a more habitable world. Drawing inspiration from the active archives of feminist precursors, existing and re-imagined, and by way of a re-engagement in the histories, theories and projected futures of critical feminist projects, the book presents a collection of twenty-three essays and eight projects, with the aim of taking stock of our current condition and re-engaging in our precarious environment-worlds.
Visa hela texten

Helene Frichot is an Associate Professor and Docent in Critical Studies in Architecture, School of Architecture and the Built Environment, Royal Institue of Technology, KTH, Stockholm, Sweden, where she is the director of Critical Studies in Architecture. Her research examines the transdisciplinary field between architecture and philosophy; while her first discipline is architecture, she holds a PhD in philosophy from the University of Sydney (2004). Recent publications include: co-editor with Catharina Gabrielsson, Jonathan Metzger, Deleuze and the City (Edinburgh University Press, 2016); co-editor with Elizabeth Grierson and Harriet Edquist, De-Signing Design: Cartographies of Theory and Practice (Lexington Books, 2015). Catharina Gabrielsson is Docent in Architecture and an Associate Professor in Urban Theory at the School of Architecture KTH, Stockholm. Her research employs writing as a means for exploration, bridging across aesthetics, politics and economics and combining fieldwork operations with archival studies to generate material for conceptual analysis. With Helene Frichot and Jonathan Metzger, she is editor of Deleuze and the City (Edinburgh University Press, 2016), guest co-editor, with Helena Mattsson, of 'Architecture and Capitalism: Solids and Flows' (Architecture and Culture 5:2, 2017) and, with Helena Mattsson and Kenny Cupers, editor of the forthcoming volume Neoliberalism: An Architectural History (University of Pittsburgh Press). She is the director of the doctoral programme Art, Technology and Design. Helen Runting is an urban planner (B.UPD; University of Melbourne) and urban designer (PG.Dip UD, University of Melbourne; MSc.UPD, Royal Institute of Technology (KTH), Stockholm), and a PhD candidate within Critical Studies in Architecture at KTH. Her research is situated within the field of architectural theory and addresses the images, politics, property relations, and aesthetics of the "unbuilt environment" of Sweden's architectural present. Helen is a founding member of the architecture collective Svensk Standard (2008-), and the architectural practice Secretary (2017-).