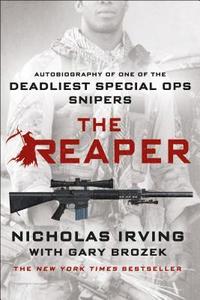 Autobiography of One of the Deadliest Special Ops Snipers

av Nicholas Irving
(1 röst)
Häftad Engelska, 2016-01-26
211
Bevaka
Spara som favorit
Tillfälligt slut – klicka "Bevaka" för att få ett mejl så fort boken går att köpa igen.
Finns även som
Visa alla 1 format & utgåvor
Ground-breaking, thrilling and revealing, The Reaper is the astonishing memoir of Special Operations Direct Action Sniper Nicholas Irving, the 3rd Ranger Battalion's deadliest sniper with 33 confirmed kills, though his remarkable career total, including probable, is unknown. In the bestselling tradition of American Sniper and Shooter, Irving shares the true story of his extraordinary career, including his deployment to Afghanistan in the summer of 2009, when he set another record, this time for enemy kills on a single deployment. His teammates and chain of command labelled him "The Reaper," and his actions on the battlefield became the stuff of legend, culminating in an extraordinary face-off against an enemy sniper known simply as The Chechnian. Irving's astonishing first-person account of his development into an expert assassin offers a fascinating and extremely rare View of special operations combat missions through the eyes of a Ranger sniper during the Global War on Terrorism. From the brotherhood and sacrifice of teammates in battle to the cold reality of taking a life to protect another, no other book dives so deep inside the life of a sniper on point.
Visa hela texten

"A gripping account from a man whose lethal aim took out 33 Taliban fighters on one deployment, a record." --New York Daily News "Gripping.... Irving's book is a focused, fast-paced tale that, like Irving, never loses sense of its mission." --San Diego Union Tribune "This gritty, unapologetic look into the life of a special operations soldier recounts both harrowing and heartfelt tales from the on-the-job experiences of Irving...This account is perhaps not for the faint of heart, but it is sure to be intriguing for those who are made of less squeamish stuff." --Library Journal "Gung-ho account of a sniper's time in Afghanistan....Irving...is adept at discussing the uncompromising minutiae of weapons, tactics and battle staging, the lifeblood of the elite sniper fraternity." --Kirkus Reviews "A breathless, tension-filled account of the day-to-day combat experiences of a sniper in Afghanistan.... Brozek gives Irving's story shape, heart, and context as he helps convey Irving's mixed emotions about his role in combat. But the real craft is in the book's the artful depictions of battle. Readers are brought into the heat of the fight with white-knuckle anxiety, as troops edge their way toward IED-laden targets, chaotic firefights, and suicide bombers." --Publishers Weekly "Nick Irving has a story to tell that every American should hear. This captivating journey is about much more than just getting your hands dirty for Uncle Sam... It's about what it means to be an American in this necessary battle against fundamental terrorism." --Mike Ritland, New York Times bestselling author of Trident K9 Warriors and Navy SEAL Dogs "Nick Irving's story is proof that the Army's 75th Ranger Regiment is carrying their share of the load in the fight against global terrorism. He's also one of the most accomplished snipers in the US military. If you want to see the war through the precision of a sniper's scope then read The Reaper." --Brandon Webb, former Navy SEAL sniper, author of The Red Circle, and editor for SOFREP.com "If Navy SEAL Chris Kyle - America's deadliest sniper ever - was the Killer Man, Army Ranger Nick Reaper Irving was the Killer Man's Son, doing the killing with Dirty Diana till the killer man comes. The Reaper is raw, unforgiving, and unapologetic, placing the reader inside the sniper hide, trigger slacked, and cross hairs steady, capturing the moments before the body count reached thirty-three." --Dalton Fury, former Delta Force Commander and New York Times bestselling author of Full Assault Mode and Kill Bin Laden "I am amazed by the parallels between Nick's life and my own. I am also deeply humbled and appreciative that we still produce men like this. I would be on his team any day. The Reaper is the kind of book that you have to live to write--and it's more exciting than any thriller could be." --Howard Wasdin, Navy SEAL and New York Times bestselling author of SEAL Team Six "A great look through the scope of what it's like to be a sniper in battle and home. The Reaper is a hell of a book." --Marine Sniper Sgt. Jack Coughlin, New York Times bestselling author of Shooter

NICHOLAS IRVING spent six years in the Army's Special Operations 3rd Ranger Battalion 75th Ranger Regiment, serving from demolitions assaulter to Master Sniper. He was the first African American to serve as a sniper in his battalion and is now the owner of HardShoot, where he trains personnel in the art of long-range shooting, from Olympians to members of the Spec Ops community. He also appears as a mentor on the Fox reality show American Grit. He lives in San Antonio, Texas. His next book, Way of the Reaper, will be published in August 2016. GARY BROZEK has co-authored nearly 20 books, including five New York Times bestsellers.