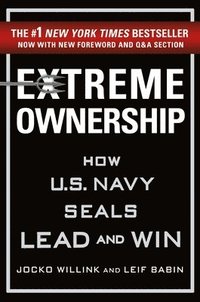 av Jocko Willink
(8 röster)  |  Läs 1 recension
Inbunden Engelska, 2017-12-06
259
Köp
Spara som favorit
Finns även som
Visa alla 2 format & utgåvor
Highly decorated Navy SEALs, now successful businessmen, show readers how to lead and win in business and in life with principles learned on the battlefield. In Extreme Ownership, Jocko Willink and Leif Babin share hard-hitting, Navy SEAL combat stories that translate into lessons for business and life. With riveting first-hand accounts of making high-pressure decisions as Navy SEAL battlefield leaders, this book is equally gripping for leaders who seek to dominate other arenas. Jocko and Leif served together in SEAL Task Unit Bruiser, the most highly decorated Special Operations unit from the war in Iraq. Their efforts contributed to the historic triumph for U.S. forces in Ramadi. Through those difficult months of sustained combat, Jocko, Leif and their SEAL brothers learned that leadership - at every level - is the most important thing on the battlefield.
Visa hela texten

"This is the SEAL Leadership book we have been waiting for. Poignant, powerful, practical. A must read for every leader." --Roger Ailes, Chairman and CEO, Fox News Channel and Fox Business Network, and chairman, Fox Television Stations"Leif and Jocko are the real deal. I'm honored to have served with them. They led SEALs in the fight through the hell that was the Battle of Ramadi. This book shows how they did it." --Marcus Luttrell, U.S. Navy SEAL and #1 national bestselling author of Lone Survivor"The smartest, most revolutionary management approach since Jack Welch's Six Sigma." --Don Imus, radio host, Imus in the Morning"Finally, a leadership book that actually demonstrates how to truly lead. Riveting, engaging, and free from the usual cliche platitudes, this book is strikingly impactful and will dramatically improve leaders of all types." --Amy Brandt Schumacher, entrepreneur, executive, and philanthropist"Extreme Ownership provides huge value for leaders at all levels. An inspiring and page-turning read, the leadership lessons are easy to digest and implement. It provides a powerful SEAL framework for action to lead teams in high-stakes environments. This book made me a better leader and enabled my entire team step up our game!" --Jared Hamilton, founder and CEO, DrivingSales"One of the best books on leadership I've ever read and a tremendous war story book as well." --Marc Andreessen