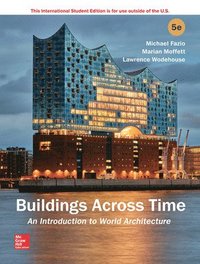 ISE Buildings Across Time: An Introduction to World Architecture

av Michael Fazio
Häftad Engelska, 2018-10-04
935
Köp
Spara som favorit
Finns även som
Visa alla 1 format & utgåvor
Now in its fifth edition, buildings across time brilliantly explores the essential attributes of architecture by uniquely combining both a detailed survey of western architecture, including Pre-Columbian America, and an introduction to architecture from the Middle East, India, Russia, China, and Japan.  This latest edition includes over 450 new photos, a new essay on the vision of Pope Pius II, and updates on buildings in various parts of the world, such as those that have been given new purpose and those that have been damaged by ISIS.
Written in a clear and engaging style, the text encourages readers to examine closely in photographs and line drawings the pragmatic, innovative, and aesthetic attributes of buildings, and to imagine how these would have been praised or criticized by contemporary observers.  Architecture is discussed in various contexts - artistic, economic, environmental, political, social, and technological - so as to determine the extent to which buildings met the needs of clients, society at large, and future generations.
Visa hela texten

Marian Moffett earned a B.Arch. at North Carolina State University (1971) and the M.Arch. and PhD. at the Massachusetts Institute of Technology (1973 and 1975, respectively). She taught architectural history at he University of Tennessee from 1975 until her death in 2004 where she collaborated with Lawrence Wodehouse in producing exhibitions and catalogs on the architecture of the Tennessee Valley Authority and cantilever barns, as well as co-authoring A History of Western Architecture and East Tennessee Cantilever Barns. Her research included work on wooden architecture in eastern Europe and town planning in Tennessee. She was active with the Southeast Chapter of the Society of Architectural Historians and has served as President of the UT Faculty Senate and as an academic administrator in the Office of the Provost.