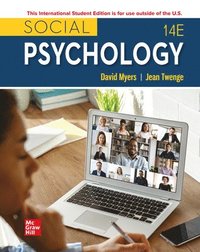 av David Myers
Häftad Engelska, 2021-12-29
Studentlitteratur
592
Köp
Spara som favorit
Finns även som
Visa alla 1 format & utgåvor
Connecting Social Psychology to the world around us. social psychology introduces students to the science of us: our thoughts, feelings, and behaviors in a changing world. Students learn to think critically about everyday behaviors and gain an appreciation for the world around us, regardless of background or major. social psychologys conversational voice allows students to access and enjoy this exciting science. Students find scientific explorations of love, hate, conformity and independence, prejudice and helping, persuasion and self-determination.
Visa hela texten

David Meyers (Sydney, Australia) is Vice President of Engineering for Dilithium Networks. He has worked for many years within British Telecoms R&D Division and served as Broadband Delivery Manager for BTopenworld, the largest broadband provider in the UK. He is a part-time lecturer at Sydney University and serves as a broadband technical expert to the European Commission.

David Myers is the John Dirk Werkman Professor of Psychology at Hope College where he has taught for the past 30 years.  David Myers' love of teaching psychology has been rewarded by students on many occasions with numerous Outstanding Professor awards.  An award-winning researcher, Dr. Myers received the Gordon Allport Prize from Division 9 of the American Psychological Association for his work on group polarization.  His scientific articles have appeared in more than two dozen journals, including Science, American Scientist, Psychological Bulletin, and Psychological Science.  He has served his discipline as consulting editor to the Journal of Experimental Social Psychology and the Journal of Personality and Social Psychology.

she summarized this research for a broader audience in the books generation me: why today's young americans are more confident, assertive, entitled- and more miserable than ever before and the narcissism epidemic: living in the age of entitlement (co-authored with w. keith campbell). she has written for general audiences on several websites and magazines, including a piece for the atlantic that was nominated for a national magazine award. she frequently gives talks and seminars on generational differences to audiences such as college faculty and staff, military personnel, camp directors, and corporate executives.