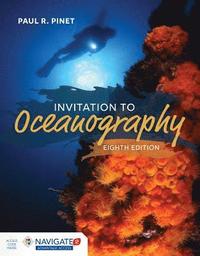 av Paul R Pinet
Inbunden Engelska, 2019-10-24
Studentlitteratur
706
Köp
Spara som favorit
Finns även som
Visa alla 2 format & utgåvor
Invitation to Oceanography, Eighth Edition introduces students to the key concepts from geology, chemistry, physics, and biology as it relates to ocean environments and processes. This comprehensive text helps students learn how scientists interpret data, taking raw knowledge and transforming it into real understanding. As concepts are explained and described with words and numbers, students can apply their learning using questions at the end of each chapter, including the Review of Basic Concepts, Critical-Thinking Essays, and Discovering with Numbers.
Visa hela texten

Paul Pinet teaches geology, oceanography, and environmental studies courses at Colgate University, located in central New York State. He earned B.A. and M.S. degrees in geology from the University of New Hampshire and the University of Massachusetts, respectively, and a PhD in oceanography from the University of Rhode Island. His research has been focused on the geology of continental margins, coastal bluff erosion, estuarine sedimentation, and more recently on the philosophical dimensions of deep time. At the moment, he is developing long-term (millennia) conservation strategies for barrier islands in response to rising sea level and for mitigating the ongoing extinction event in New England and its ocean. Pinet spent summers during much of his adult life either climbing mountains around the world or cruising on his small, gaff-headed catboat (Taillefer) off the New England coast. Though an oceanographer, Pinet admits that he fears water more than high, avalanche-prone mountains. At the moment, he is working on a book of essays entitled Shadowed by Deep Time.