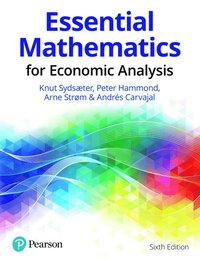 av Knut Sydsaeter
Häftad Engelska, 2021-04-22
Studentlitteratur
669
Köp
Spara som favorit
Finns även som
Visa alla 5 format & utgåvor
Acquire the key mathematical skills you need to master and succeed in economics Essential Mathematics for Economic Analysis, 6th edition by Sydsaeter, Hammond, Strom and Carvajal is a global best-selling text that provides an extensive introduction to all the mathematical tools you need to study economics at intermediate level. This book has been applauded for its scope and covers a broad range of mathematical knowledge, techniques and tools, progressing from elementary calculus to more advanced topics. With a wealth of practice examples, questions and solutions integrated throughout, as well as opportunities to apply them in specific economic situations, this book will help you develop key mathematical skills as your course progresses. Key features: - Numerous exercises and worked examples throughout each chapter allow you to practise skills and improve techniques. - Review exercises at the end of each chapter test your understanding of a topic, allowing you to progress with confidence. - Solutions to exercises are provided in the book and online, showing you the steps needed to arrive at the correct answer. Pearson, the world's learning company.
Visa hela texten