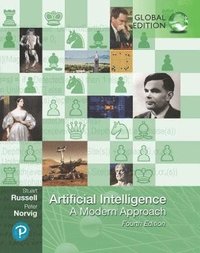 Stuart Russell was born in 1962 in Portsmouth, England. He received his B.A. withfirst-class honours in physics from Oxford University in 1982, and his Ph.D. incomputer science from Stanford in 1986. He then joined the faculty of theUniversity of California at Berkeley, where he is a professor and former chairof computer science, director of the Center for Human-Compatible AI, and holderof the Smith-Zadeh Chair in Engineering. In 1990, he received the PresidentialYoung Investigator Award of the National Science Foundation, and in 1995 he wasco-winner of the Computers and Thought Award. He is a Fellow of the AmericanAssociation for Artificial Intelligence, the Association for ComputingMachinery, and the American Association for the Advancement of Science, and HonoraryFellow of Wadham College, Oxford, and an Andrew Carnegie Fellow. He held theChaire Blaise Pascal in Paris from 2012 to 2014. He has published over 300papers on a wide range of topics in artificial intelligence. His other booksinclude: The Use of Knowledge in Analogy and Induction, Do the Right Thing:Studies in Limited Rationality (with Eric Wefald), and Human Compatible:Artificial Intelligence and the Problem of Control. Peter Norvig iscurrently Director of Research at Google, Inc., and was the directorresponsible for the core Web search algorithms from 2002 to 2005. He is aFellow of the American Association for Artificial Intelligence and theAssociation for Computing Machinery. Previously, he was head of theComputational Sciences Division at NASA Ames Research Center, where he oversawNASA's research and development in artificial intelligence and robotics, andchief scientist at Junglee, where he helped develop one of the first Internetinformation extraction services. He received a B.S. in applied mathematics fromBrown University and a Ph.D. in computer science from the University ofCalifornia at Berkeley. He received the Distinguished Alumni and EngineeringInnovation awards from Berkeley and the Exceptional Achievement Medal fromNASA. He has been a professor at the University of Southern California and aresearch faculty member at Berkeley. His other books are: Paradigms of AIProgramming: Case Studies in Common Lisp, Verbmobil: A Translation System forFace-to-Face Dialog, and Intelligent Help Systems for UNIX. The two authors shared the inaugural AAAI/EAAI Outstanding Educatoraward in 2016.