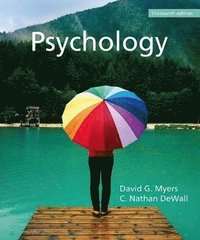 av David Myers, C Nathan Dewall
Häftad Engelska, 2020-12-10
Studentlitteratur
681
Köp
Spara som favorit
Finns även som
Visa alla 2 format & utgåvor
From its beginnings to this remarkably fresh and current new edition, Myers and DeWall's Psychology has found extraordinarily effective ways to involve students with the remarkable research underlying our understanding of human behavior. But while the content and learning support evolves edition after edition, the text itself continues to be shaped by basic goals David Myers established at the outset, including to connect students to high-impact research, to focus on developing critical thinking skills, and to present a multicultural perspective on psychology, so students can see themselves in the context of a wider world. This new edition offers 2100 research citations dated 2015-2020, making these the most up-to-date introductory psychology course resources available. With so many exciting new findings, and every chapter updated with current new examples and ideas, students will see the importance and value of psychological research, and how psychology can help them make sense of the world around them. The abundant, high quality teaching and learning resources in LaunchPad, carefully matched to the text content, help students succeed, while making life easier and more enjoyable for instructors.
Visa hela texten

David Myers received his B.A. in chemistry from Whitworth University, and his psychology Ph.D. from the University of Iowa. He has spent his career at Hope College, Michigan, where he has taught dozens of introductory psychology sections. Hope College students have invited him to be their commencement speaker and voted him "outstanding professor." His research and writings have been recognized by the Gordon Allport Intergroup Relations Prize, an Honored Scientist award from the Federation of Associations in Behavioral & Brain Sciences, an award for Distinguished Service on Behalf of Social-Personality Psychology , a Presidential Citation from APA Division 2, election as an American Association for the Advancement of Science Fellow, and three honorary doctorates. With support from National Science Foundation grants, Myers' scientific articles have appeared in three dozen scientific periodicals, including Science, American Scientist, Psychological Science, and the American Psychologist. In addition to his scholarly writing and his textbooks for introductory and social psychology, he also digests psychological science for the general public. His writings have appeared in four dozen magazines, from Today's Education to Scientific American. He also has authored five general audience books, including The Pursuit of Happiness and Intuition: Its Powers and Perils. David Myers has chaired his city's Human Relations Commission, helped found a thriving assistance center for families in poverty, and spoken to hundreds of college, community, and professional groups worldwide. Drawing on his experience, he also has written articles and a book (A Quiet World) about hearing loss, and he is advocating a transformation in American assistive listening technology see www.hearingloop.org). For his leadership, he has received awards from the American Academy of Audiology, the hearing industry, and the Hearing Loss Association of America. David and Carol Myers met and married while undergraduates, and have raised sons Peter and Andrew, and a daughter, Laura. They have one grandchild, Allie. Nathan DeWall is professor of psychology at the University of Kentucky. He received his bachelor's degree from St. Olaf College, a master's degree in social science from the University of Chicago, and a master's degree and Ph.D. in social psychology from Florida State University. DeWall received the College of Arts and Sciences Outstanding Teaching Award, which recognizes excellence in undergraduate and graduate teaching. The Association for Psychological Science identified DeWall as a "Rising Star" early in his career for "making significant contributions to the field of psychological science." He is in the top 1 percent of all cited scientists in psychology and psychiatry on the Institute for Scientific Information list, according to the Web of Science. DeWall conducts research on close relationships, self-control, and aggression. With funding from the National Institutes of Health, the National Science Foundation, and the John Templeton Foundation, he has published over 200 scientific articles and chapters. DeWall's research awards include the SAGE Young Scholars Award from the Foundation for Personality and Social Psychology, the Young Investigator Award from the International Society for Research on Aggression, and the Early Career Award from the International Society for Self and Identity. His research has been covered by numerous media outlets, including Good Morning America, The Wall Street Journal, Newsweek, The Atlantic Monthly, The New York Times, The Los Angeles Times, Harvard Business Review, USA Today, National Public Radio, the BBC, and The Guardian. He has lectured nationally and internationally, including in Hong Kong, China, the Netherlands, England, Greece, Hungary, Sweden, Australia, and France. Nathan is happily married to Alice DeWall and is the proud father of Beverly "Bevy&quo