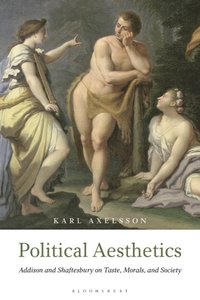 Addison and Shaftesbury on Taste, Morals and Society

Ladda ned
Spara som favorit
Ladda ned och läs i en e-boksläsare. Tips på appar
Finns även som
Visa alla 3 format & utgåvor
Providing a gateway to a new history of modern aesthetics, this book challenges conventional views of how art's significance developed in society.The 18th century is often said to have involved a radical transformation in the concept of art: from the understanding that it has a practical purpose to the modern belief that it is intrinsically valuable. By exploring the ground between these notions of art's function, Karl Axelsson reveals how scholars of culture made taste, morals and a politically stable society integral to their claims about the experience of nature and art. Focusing on writings by two of the most prolific men of letters in the 18th century, Joseph Addison (1672 1719) and the third Earl of Shaftesbury (1671 1713), Axelsson contests the conviction that modern aesthetic autonomy reoriented the criticism and philosophy originally prompted by these two key figures in the history of aesthetics. By re-examining the political relevance of Addison and Shaftesbury's theories of taste, Axelsson shows that first and foremost they sought to fortify a natural link between aesthetic experience and modern political society.
Visa hela texten