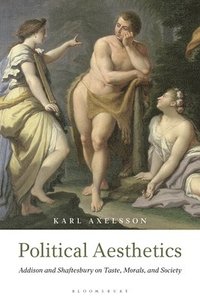 Addison and Shaftesbury on Taste, Morals and Society

av Karl Axelsson
Häftad Engelska, 2021-02-25
684
Köp
Spara som favorit
Kan levereras innan julafton!
Finns även som
Visa alla 3 format & utgåvor
Providing a gateway to a new history of modern aesthetics, this book challenges conventional views of how art's significance developed in society. The 18th century is often said to have involved a radical transformation in the concept of art: from the understanding that it has a practical purpose to the modern belief that it is intrinsically valuable. By exploring the ground between these notions of art's function, Karl Axelsson reveals how scholars of culture made taste, morals and a politically stable society integral to their claims about the experience of nature and art. Focusing on writings by two of the most prolific men of letters in the 18th century, Joseph Addison (1672-1719) and the third Earl of Shaftesbury (1671-1713), Axelsson contests the conviction that modern aesthetic autonomy reoriented the criticism and philosophy originally prompted by these two key figures in the history of aesthetics. By re-examining the political relevance of Addison and Shaftesbury's theories of taste, Axelsson shows that first and foremost they sought to fortify a natural link between aesthetic experience and modern political society.
Visa hela texten

Political Aesthetics magnificently re-writes the history of early eighteenth century British aesthetic thought. For too long Addison and Shaftesbury's aesthetic speculations have been read in massively distorting ways and contexts, essentially seeing these writings as pre-cursors to Kant. Axelsson demonstrates that they are both more interesting and strange: careful and detailed explorations in the moral and political sinews of aesthetic thought. This intervention will not only re-orient histories of aesthetics it will also provide a substantial basis for thinking the aesthetic in our own time. -- Peter de Bolla, Professor of Cultural History and Aesthetics, University of Cambridge, UK Axelsson's Political Aesthetics: Addison and Shaftesbury on Taste, Morals, and Society is a comprehensive and penetrating account of the aesthetics of Addison and Shaftesbury. It offers a wealth of philosophical insight and valuable scholarship on Addison and Shaftesbury in particular and on the history of aesthetics in general. Axelsson shows that Addison and Shaftesbury developed a rich and important view that took aesthetic value to be neither entirely instrumental nor entirely autonomous, a view on which taste becomes an integral moral part of the basis of society. * Michael Gill, Professor of Philosophy, University of Arizona, US * In this admirably intense engagement, Axelsson questions both content and method in philosophical history. He shows how Addison, Shaftesbury and other writers argued the intrinsic connection between, on one hand, the experience of beauty, taste and art and, on the other, politics, religion and morals. Thus, he points toward a new history of eighteenth-century British aesthetics, more persuasive than one organised to explain Kant. * Lawrence Klein, Emeritus Fellow, Emmanuel College, University of Cambridge, UK * Karl Axelsson's book is an excellent, thought-provoking, and mature scholarly achievement that undoubtedly succeeds in making the job of future historians more complicated: they will have less excuse for creating an oversimplified narration of the early history of modern aesthetics or for ignoring its profound heteronomy and complexity. * British Journal of Aesthetics * In Political Aesthetics, Axelsson models a self-reflective engagement with historical alterity. By offering a better understanding of the complexities of the past, his study promises a fuller understanding of the complexities of the present. * Rivista di Filosofia * Axelsson lays the foundation for his arguments with lucid reviews of relevant scholarship and the helpful rehearsal of historical contexts. When the prose digresses, it remains informative. His study is distinguished by its attention to a wider range of texts than usual. * I castelli di Yale *

Karl Axelsson is Senior Lecturer in Aesthetics at Soedertoern University, Stockholm, Sweden. He is the author of The Sublime: Precursors and British Eighteenth-Century Conceptions (Peter Lang, 2007) and co-editor of Beyond Autonomy in Eighteenth-Century British and German Aesthetics (Routledge, 2020). Axelsson is also the Swedish translator of the third Earl of Shaftesbury's The Moralists, a Philosophical Rhapsody.

Acknowledgements Note to the Reader Introduction Rethinking a Provenance Reading the History of Aesthetics Addison and the Body Politic Shaftesbury, Affections, and Society Part I: Addison, Taste, and the Moral Body Politic 1.1 The Displacement of Political Authority 1.2 The Disposition of Taste 1.3 Aurelia and Fulvia 1.4 Ethico-Emotive Pleasures 1.5 Faith and Political Enthusiasm 1.6 Britain and the New Classicism 1.7 The Perils of the Foreign Part II: Moved by Affections: Shaftesbury on Beauty and Society 2.1 Natural Affections 2.2 Self-Knowledge and Disinterestedness 2.3 A Disinterested (Aesthetic) Perception 2.4 The Work of Art as a Whole 2.5 Taste for Society Coda: Reading Addison and Shaftesbury in the Future Bibliography Index