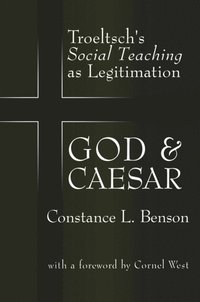 av Constance L Benson
E-bok (EPUB - DRM), Engelska, 2018-01-16
469
Ladda ned
Spara som favorit
Laddas ned direkt
Läs i vår app för iPhone, iPad och Android
Finns även som
Visa alla 3 format & utgåvor
H. Richard Niebuhr's powerful interpretation of Ernst Troeltsch has shaped our view of the man for over seventy years. Troeltsch is one of the most respected and renowned figures in liberal Protestant thought. Yet as Harvard philosopher of religion Cornel West observes in his foreword, Constance Benson &quoteshat-ters certain crucial aspects of Troeltsch's image as a liberal religious thinker&quote with God and Caesar.Benson reconstructs the historical context in which Troeltsch wrote his landmark The Social Teaching of the Christian Churches, and reinterprets it in relation to that context. She shows that Troeltsch's Christian-ity legitimized class, religious, and gender inequality in response to the challenges of social democracy. Her controversial exploration of why most Troeltsch scholars have remained silent on this deserves seri-ous consideration. Her discovery of Troeltsch's rolein the politics and ideological debates of Imperial Germany require a painful reexamina-tion of an entire chapter of Protestant history. Benson exposes Troeltsch's relationship to Paul de Lagarde, a notorious anti-Semite and architect of what later became Nazi ideology.God and Caesaris a needed corrective. Troeltsch is an important figure for the Chris-tian right in Germany and for many mainstream Protestants in the United States. Benson's courageous book is the most challenging critique of Troeltsch's politics we have-an unsettling perspective that forces us to revise the beloved Troeltsch so many of us had come to admire and cherish. It will be of interest to intellectual historians, theologians and students of religious history, and specialists in German social and political history.
Visa hela texten