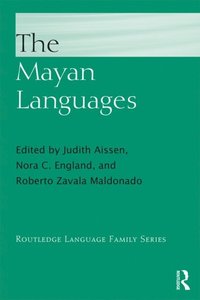 av Judith Aissen, Nora C England, Roberto Zavala Maldonado
E-bok (PDF - DRM), Engelska, 2017-05-12
719
Ladda ned
Spara som favorit
Laddas ned direkt
Läs i vår app för iPhone, iPad och Android
Finns även som
Visa alla 3 format & utgåvor
The Mayan Languages presents a comprehensive survey of the language family associated with the Classic Mayan civilization (AD 200-900), a family whose individual languages are still spoken today by at least six million indigenous Maya in Mexico, Guatemala, Belize, and Honduras. This unique resource is an ideal reference for advanced undergraduate and postgraduate students of Mayan languages and linguistics. Written by a team of experts in the field, The Mayan Languages presents in-depth accounts of the linguistic features that characterize the thirty-one languages of the family, their historical evolution, and the social context in which they are spoken. The Mayan Languages:provides detailed grammatical sketches of approximately a third of the Mayan languages, representing most of the branches of the family; includes a section on the historical development of the family, as well as an entirely new sketch of the grammar of &quoteClassic Maya&quote as represented in the hieroglyphic script; provides detailed state-of-the-art discussions of the principal advances in grammatical analysis of Mayan languages; includes ample discussion of the use of the languages in social, conversational, and poetic contexts. Consisting of topical chapters on the history, sociolinguistics, phonology, morphology, syntax, semantics, discourse structure, and acquisition of the Mayan languages, this book will be a resource for researchers and other readers with an interest in historical linguistics, linguistic anthropology, language acquisition, and linguistic typology.
Visa hela texten