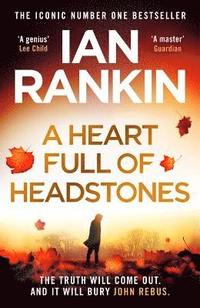 A Heart Full of Headstones

The Gripping New Must-Read Thriller from the No.1 Bestseller Ian Rankin

av Ian Rankin
Inbunden Engelska, 2022-10-13
259
Köp
Spara som favorit
Finns även som
Visa alla 2 format & utgåvor
THE BRAND NEW REBUS THRILLER FROM THE ICONIC NUMBER ONE BESTSELLER. ONE OF THE MUST-READ NOVELS OF THE YEAR. John Rebus had been in court plenty of times, but this was his first time in the dock... John Rebus stands accused: on trial for a crime that could put him behind bars for the rest of his life. Although it's not the first time the legendary detective has taken the law into his own hands, it might be the last. What drove a good man to cross the line? Or have times changed, and the rules with them? Detective Inspector Siobhan Clarke faces Edinburgh's most explosive case in years, as a corrupt cop goes missing after claiming to harbour secrets that could sink the city's police force. But in this investigation, it seems all roads lead to Rebus - and Clarke's twin loyalties to the public and the police will be tested to their limit. A reckoning is coming - and John Rebus may be hearing the call for last orders... * * * * * PRAISE FOR A HEART FULL OF HEADSTONES: 'I loved it hugely! Rebus is one of fiction's greatest creations.' MARIAN KEYES 'Phenomenal ... The ending is going to floor readers. Everyone is going to be talking about this!' MICK HERRON 'Magnificent - beautifully written, clever - and what an ending!' KATE MOSSE 'Peerless. Immaculately crafted, gripping, intricately textured. By turns wry, brutal, unflinching, heart-filled.' SARAH VAUGHAN 'The standout novel from one of the great storytellers of our generation ... The kind of ending you won't ever forget.' CHRIS WHITAKER * * * * * PRAISE FOR THE ICONIC NUMBER ONE BESTSELLER IAN RANKIN: 'Ian Rankin is a genius' LEE CHILD 'Rebus is one of British crime writing's greatest characters: alongside Holmes, Poirot and Morse' DAILY MAIL 'Whatever he writes, it will be worth reading ... Rankin has redefined the genre' GUARDIAN 'The arrival of a Rankin novel remains one of life's pleasures' EXPRESS 'Rankin is a phenomenon' SPECTATOR 'Worthy of Agatha Christie at her best' SCOTSMAN 'The king of crime fiction' SUNDAY EXPRESS 'Great fiction, full stop' THE TIMES
Visa hela texten

Ian Rankin is the multimillion-copy worldwide bestseller of over thirty novels and creator of John Rebus. His books have been translated into thirty-six languages and have been adapted for radio, the stage and the screen. Rankin is the recipient of four Crime Writers' Association Dagger Awards, including the Diamond Dagger, the UK's most prestigious award for crime fiction. In the United States, he has won the celebrated Edgar Award and been shortlisted for the Anthony Award. In Europe, he has won Denmark's Palle Rosenkrantz Prize, the French Grand Prix du Roman Noir and the German Deutscher Krimipreis. He is the recipient of honorary degrees from universities across the UK, is a Fellow of The Royal Society of Edinburgh and a Fellow of The Royal Society of Literature, and has received an OBE for his services to literature. Website: IanRankin.net Twitter: @Beathhigh Facebook: IanRankinBooks