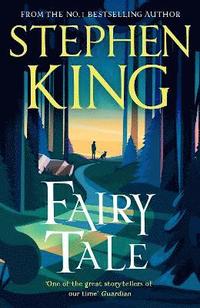 The No. 1 Sunday Times Bestseller

av Stephen King
(1 röst)
Inbunden Engelska, 2022-09-06
253
Köp
Spara som favorit
'Fairy Tale is vintage, timeless King, a transporting, terrifying treat' - Guardian 'A blazing flash of creativity . . . King's best book in over a decade' - Esquire Legendary storyteller Stephen King goes into the deepest well of his imagination in this spellbinding novel about a seventeen-year-old boy who inherits the keys to a parallel world where good and evil are at war, and the stakes could not be higher - for their world or ours. Charlie Reade looks like a regular high school kid, great at baseball and football, a decent student. But he carries a heavy load. His mom was killed in a hit-and-run accident when he was seven, and grief drove his dad to drink. Charlie learned how to take care of himself - and his dad. Then, when Charlie is seventeen, he meets a dog named Radar and her ageing master, Howard Bowditch, a recluse in a big house at the top of a big hill, with a locked shed in the backyard. Sometimes strange sounds emerge from it. Charlie starts doing jobs for Mr. Bowditch and loses his heart to Radar. Then, when Bowditch dies, he leaves Charlie a cassette tape telling a story no one would believe. What Bowditch knows, and has kept secret all his long life, is that inside the shed is a portal to another world. King's storytelling in Fairy Tale soars. This is a magnificent and terrifying tale about another world than ours, in which good is pitted against overwhelming evil, and a heroic boy - and his dog - must lead the battle.
Visa hela texten

There is a splendid climactic battle . . . King's delight in the world he has created is infectious and there's much to revel in here * Daily Telegraph * With ogres and castles, maidens and pots of gold, this is a fairy story through-and-through. Because it's Stephen King's, it's a Once-Upon-A-Time tale like no other * Daily Mail * Fairy Tale is a multiverse-traversing, genre-hopping intertextual mash-up, with plenty of Easter eggs for regular King devotees . . . allusions and homages abound . . . a page-turner driven by memorably strange encounters and well-rendered, often thrilling action * New York Times Book Review * Fairy Tale is vintage, timeless King, a transporting, terrifying treat born from multiple lockdowns which, in true King style, puts its finger right on that tender point which is the threshold between childhood and growing up * Guardian * The latest addictive thriller from King * The List * King's reputation precedes him, and his spellbinding new novel is magnificent and terrifying * Living North Magazine * The hailed King of masterful writing has pierced the page with mighty words once again, releasing a whopping fantasy novel, reminiscent of the haunting magnificence of those Brothers Grimms . . . Fairy Tale soars, allowing you to bask happily ever after in its unforgettable spell * Buzz Magazine * A blazing flash of creativity . . . King's best book in over a decade * Esquire * A really enjoyable and enthralling read, both exciting and enchanting, and yet another captivating tale from the pen of Stephen King * The Afterword * A fantasy gem . . . King tells this wonderfully fantastical tale with such effortless skill that the reader cannot help but fully invest in Charlie and all the characters, his evocation of late 20th-century small-town USA and its people pitch perfect, and his descriptions of the parallel world of Empis . . . vividly terrifying * Irish Independent * Some brilliantly written escapism . . . featuring a loyal dog, a grieving hero and childhood fears and dreams made real . . . King at his finest * Evening Standard * A spellbinding tale that bursts with imagination * Woman's Own * Stephen King is the world's greatest storyteller. Fairy Tale had me enchanted from page one. I remain in total awe at his genius * David Walliams * Magnificent . . . a doorstop chronicle of small-town America, and the battle between good and evil. Classic King, and clearly written with joy . . . He is one of the best writers on childhood and teenagers, which continues in Fairy Tale * Richard Osman, The Sunday Times * The master storyteller returns with a spellbinding story of mysterious houses, parallel worlds and reluctant heroes as an ordinary high school kid discovers a portal to a universe populated by classic fairy tale archetypes * Waterstones * If you've ever enjoyed classic King - coming-of-age stories grounded as much in suburban neighbourhoods as in supernatural fairylands - you will enjoy this * Literary Review * A dark, dazzlingly inventive fantasy novel * Daily Mirror, Best Books of 2022 *

STEPHEN KING is the author of more than seventy books, all of them worldwide bestsellers, including Billy Summers, If It Bleeds and The Institute. Many of his titles are the basis for major motion pictures, TV series and streamed events, including IT, Stand By Me (adapted from The Body), and The Shawshank Redemption, which is IMDb's top-rated movie of all time. King is the recipient of the 2020 Audio Publishers Association Lifetime Achievement Award, the 2018 PEN America Literary Service Award, the 2014 National Medal of Arts, and the 2003 National Book Foundation Medal for Distinguished Contribution to American Letters. He lives in Bangor, Maine, with his wife, novelist Tabitha King.