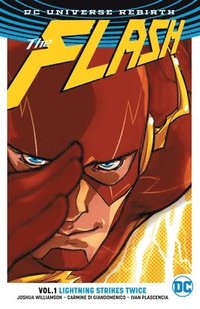 av Joshua Williamson
Häftad Engelska, 2017-01-24
210
Köp
Spara som favorit
A part of DC Rebirth! A new storm brews over Central City and disproves the old adage about lightning never, well...you know. Just as Barry begins to feel overwhelmed fighting crime, a new speedster debuts--but just where did this amazing new friend come from? Spinning directly out of the epic events of DC UNIVERSE: REBIRTH, the Fastest Man Alive finds himself at the center of a DC Universe at a crossroads--and reeling from the reemergence of his protegee, Wally West! From up and coming writer Joshua Williamson (Illuminati, Red Skull) and illustrator Carmine Di Giandomenico comes THE FLASH VOL. 1! Collects issues #1-6 and THE FLASH: REBIRTH #1. Rebirth honors the richest history in comics, while continuing to look towards the future. These are the most innovative and modern stories featuring the world's greatest superheroes, told by some of the finest storytellers in the business. Honoring the past, protecting our present, and looking towards the future. This is the next chapter in the ongoing saga of the DC Universe. The legacy continues.
Visa hela texten

Joshua Williamson lives in Portland, Oregon. His career as a comics writer kicked off the ground in 2007, and since then he has done a number of books for Shadowline, Image, Desperado Publishing, Kick Start, and DC Comics. He has written the Uncharted limited series, based on the popular, best-selling video game series, Voodoo and Marvel's Illuminati and Red Skull. He is currently writing The Flash for DC Comics.