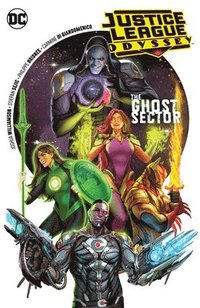 av Joshua Williamson, Stjepan Sejic
Häftad Engelska, 2019-05-21
271
Köp
Spara som favorit
Kan levereras innan julafton!
Spinning out of JUSTICE LEAGUE: NO JUSTICE comes Joshua Williamson's amazing new series Justice League Odyssey! This ragtag team of new recruits will face threats in the deep reaches of space like no League ever before! First up? These wild-card teammates try to stop Despero from slave-trading Coluan refugees, only to discover something that nothing in the universe could have prepared them for: Darkseid...who says he's there to help?! Written by Joshua Williamson (The Flash) with unbelievable illustrations from Stjepan Sejic (Aquaman), Justice League Odyssey takes the World's Greatest Super Heroes to places they've never been before! Collects issues #1-6.
Visa hela texten

Joshua Williamson lives in Portland, Oregon. His career as a comics writer kicked off in 2007, and since then he has done a number of books for Shadowline, Image, Desperado Publishing, Kick Start and DC Comics. He has written the Uncharted limited series based on the, best-selling video game, Voodoo and Marvel's Illuminati and Red Skull. He is currently writing The Flash for DC Comics.