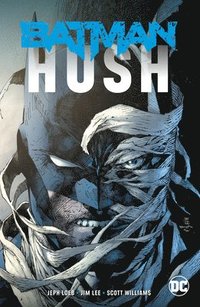 av Jeph Loeb
Häftad Engelska, 2019-09-17
310
Köp
Spara som favorit
Gotham City's worst criminals--Joker, Riddler, Ra's al Ghul, Clayface and others--have emerged to throw Batman's life into utter chaos. However, these villains are part of a much more elaborate, sinister scheme to destroy the Dark Knight once and for all, one headed by a mastermind much closer to Bruce Wayne than any foe before...Gotham City is infected by a crime epidemic and all of Batman's enemies have emerged to throw his life into utter chaos. But little do they know that they're all pawns of the villainous Hush in an elaborate game of revenge against Bruce Wayne. Pushed past his breaking point, Batman will need to use more than the world's greatest detective skills to uncover the true identity of this mysterious mastermind before it's too late. Written by Jeph Loeb (Batman: The Long Halloween, Batman: Dark Victory) and artist and DC Publisher and CCO Jim Lee (Justice League, Suicide Squad) stack the odds against the caped crusader in a story that redefined Batman for a new generation! Collects Batman #608-619.
Visa hela texten

Jeph Loeb is an Emmy Award-nominated and Eisner Award-winning writer/producer living in Los Angeles. In television, his many credits include Smallville, Lost and Heroes and in film, Teen Wolf and Commando. In comics, he is best known for his work with the supremely talented artist and partner-in-crime Tim Sale on Batman: The Long Halloween, Superman For All Seasons and Catwoman: When in Rome for DC, as well as Daredevil Yellow, Spider-Man Blue and Hulk Gray for Marvel. Jim Lee, a world-renowned comic book artist, writer, editor and publisher, is currently the Co-Publisher of DC Entertainment (DCE) alongside Dan DiDio. Known for his incredibly detailed and dynamic artistic style, Lee is one of the most revered and respected artists in American comics. A veritable legend in the industry, he has received numerous accolades and recognition for his work, including the Harvey Special Award for New Talent in 1990, the Inkpot Award in 1992, and the Wizard Fan Award in 1996, 2002 and 2003.