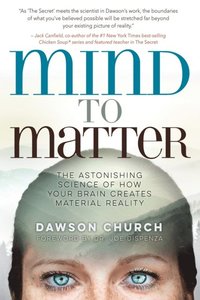 The Astonishing Science of How Your Brain Creates Material Reality

Ladda ned
Spara som favorit
Ladda ned och läs i en e-boksläsare. Tips på appar
Finns även som
Visa alla 1 format & utgåvor
Best Health Book of 2018 - American Book Fest.Best Science Books of 2018 - Bookbub.Every creation begins as a thought, from a symphony to a marriage to an ice cream cone to a rocket launch. When we have an intention, a complex chain of events begins in our brains. Thoughts travel as electrical impulses along neural pathways. When neurons fire together they wire together, creating electromagnetic fields. These fields are invisible energy, yet they influence the molecules of matter around us the way a magnet organizes iron filings.In Mind to Matter, award-winning researcher Dawson Church explains the science showing how our minds create matter. Different intentions produce different fields and different material creations. The thoughts and energy fields we cultivate in our minds condition the atoms and molecules around us. We can now trace the science behind each link in chain from thought to thing, showing the surprising ways in which our intentions create the material world. The science in the book is illustrated by many authentic case histories of people who harnessed the extraordinary power of the mind to create. They include:? Adeline, whose Stage 4 cancer disappeared after she imagined &quotehealing stars&quote ? Raymond Aaron and two of his clients, each of whom manifested $1 million in the same week ? Elon Musk, who bounced back from devastating tragedy to found Tesla and SpaceX ? Graham Phillips, who grew the emotional regulation part of his brain by 22.8% in two months ? Jennifer Graf, whose grandfather?s long-dead radio came to life to play love songs the day of her wedding ? Harold, whose 80% hearing loss reversed in an hour ? Joe Marana, whose deceased sister comforted him from beyond the grave ? Rick Geggie, whose clogged arteries cleared up the night before cardiac surgery ? Matthias Rust, a teen whose &quoteairplane flight for peace&quote changed the fate of superpowers ? Wanda Burch, whose dream about cancer told the surgeon exactly where to look for it ? An MIT freshman student who can precipitate sodium crystals with his mind ? John, who found himself floating out of his body and returned to find his AIDS healed ? Dean, whose cortisol levels dropped by 48% in a single hourIn Mind to Matter, Dawson Church shows that these outcomes aren?t a lucky accident only a few people experience. Neuroscientists have measured a specific brain wave formula that is linked to manifestation. This &quoteflow state&quote can be learned and applied by anyone. New discoveries in epigenetics, neuroscience, electromagnetism, psychology, vibration, and quantum physics connect each step in the process by which mind creates matter. They show that the whole universe is self-organizing, and when our minds are in a state of flow, they coordinate with nature's emergent intelligence to produce synchronous outcomes. The book contained over 150 photos and illustrations that explain the process, while an &quoteExtended Play&quote section at the end of each chapter provides additional resources. As Mind to Matter drops each piece of the scientific puzzle into place, it leaves us with a profound understanding of the enormous creative potential of our minds. It also gives us a road map to cultivating these remarkable brain states in our daily lives.
Visa hela texten