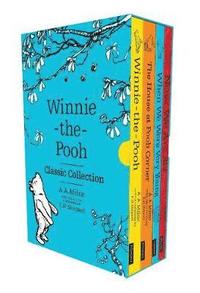 Köp
Spara som favorit
Kan levereras innan julafton!
Once upon a time, a very long time ago now, about last Friday, Winnie-the-Pooh lived in a forest all by himself under the name of Sanders.' A. A. Milne's stories about Pooh and his friends have been loved by generations of children and their parents since Winnie-the-Pooh was first published in 1926. This magnificent slipcase features the four classic Winnie-the-Pooh titles: Winnie-the-Pooh, The House at Pooh Corner, When We Were Very Young, Now We Are Six. Each volume features the original E. H. Shepard illustrations in full colour. This delightful collection is the perfect gift for Pooh fans aged 5 or 55. Look out for the the new authorized sequel, The Best Bear in all the World with brand-new stories from Paul Bright, Brian Sibley, Kate Saunders and Jeanne Willis - coming soon. The nation's favourite teddy bear has been delighting generations of children for 90 years. Milne's classic children's stories - featuring Tigger, Piglet, Eeyore, Christopher Robin and, of course, Pooh himself - are both heart-warming and funny, teaching lessons of friendship and reflecting the power of a child's imagination like no other story before or since. Pooh ranks alongside other beloved character such as Paddington Bear, and Peter Rabbit as an essential part of our literary heritage. Whether you're 5 or 55, Pooh is the bear for all ages. A.A. Milne is quite simply one of the most famous children's authors of all time. He created Winnie-the-Pooh and his friends Piglet, Eeyore, Tigger, Kanga and Roo based on the real nursery toys played with by his son, Christopher Robin. And those characters not only became the stars of his classic children's books, Winnie-the-Pooh and The House at Pooh Corner, and his poetry for children, they have also been adapted for film, TV and the stage. Through his writings for Punch magazine, A.A. Milne met E.H. Shepard. Shepard went on to draw the original illustrations to accompany Milne's classics, earning him the name "the man who drew Pooh....
Visa hela texten

Fler böcker av A A Milne

Winnie the Pooh has always been a very special (albeit funny old) bear, not least of all because his books are filled with wonderful words of wisdom. * Stylist, 2017 *

A.A. Milne was born in London in 1882 and became a successful playwright and poet. He based Winnie-the-Pooh, Piglet and friends on the real nursery toys of his son Christopher Robin and published the first of their adventures in 1926. Since then, Pooh has become a world-famous bear, and Milne's stories have been translated into seventy-two languages. E.H. Shepard was born in London in 1879. He won a scholarship to the Royal Academy Schools and later worked for Punch magazine, as a cartoonist and an illustrator. Shepard's witty and loving illustrations of Winnie-the-Pooh and his friends in the Hundred Acre Wood have become an inseparable part of the Pooh stories, and his illustrations have become classics in their own right.