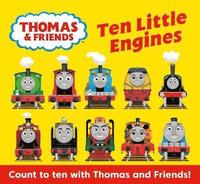 av Rev W Awdry
Kartonnage Engelska, 2019-10-03
80
Köp
Spara som favorit
Count down from ten to one and back up again with this fun Thomas and Friends adventure! Ten little engines steaming down the track. How many engines will come puffing back?! Children will love joining in counting the engines and spotting who has disappeared as you share the rhyming story in this colourful and fun board book. Perfect for pre-schoolers with its sturdy format and focus on early counting and number recognition in a creative and accessible way. There are many other Thomas titles available including: Thomas & Friends Pocket Library 9781405276030 Thomas & Friends The Steam Team Tabbed Board Book 9781405292986 Thomas & Friends Hide-and-Seek: Lift-the-Flap 9781405293129 Thomas & Friends Big Journey 9781405294614
Visa hela texten

The Thomas the Tank engines stories were created by the Reverend Wilbert Awdry, who was born in Hampshire in 1911. He grew up close to the railway and was convinced that the steam engines all had different personalities. He used to imagine conversations between them. Later when he was grown up and his son Christopher became ill with measles, Wilbert invented the Thomas stories to entertain him. Christopher kept asking for more stories and Wilbert began writing them. The first of the Railway series books was published in 1945. Awdry wrote 26 Railway books in total before his son, Christopher, took over the series. There have since been multiple, hugely popular Thomas TV series. The latest is released in 2018 and sees the engines travelling the world!