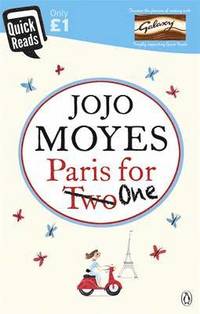 Bestselling author Jojo Moyes brings us a charming and heart-warming short story in association with Quick Reads. Nell is twenty-six and has never been to Paris. She has never even been on a weekend away with her boyfriend. Everyone knows she is just not the adventurous type. But, when her boyfriend doesn't turn up for their romantic mini-break, Nell has the chance to prove everyone wrong. Alone in Paris, Nell meets the mysterious moped-riding Fabien and his group of carefree friends. Could this turn out to be the most adventurous weekend of her life? Praise for Jojo Moyes: "Beautifully written". (The Sun). "A heartbreaking, laugh-out-loud, roller coaster". (Sunday Express). "Raw, funny, real and sad, this is storytelling at its best". (Marie Claire). Jojo Moyes is a novelist and a journalist. She worked at the Independent for ten years before leaving to write full time. Her previous novels have all been critically acclaimed and include The Ship of Brides, Foreign Fruit, The Last Letter From Your Lover, winner of Spring 2012's most popular Richard and Judy Book Club title Me Before You, top ten bestseller The Girl you Left Behind and her most recent novel, number one bestseller The One Plus One. She lives in Essex with her husband and their three children.
Visa hela texten

Jojo Moyes's poignantly romantic tales have readers streaming their way through boxes of Kleenex Sunday Express Moyes does a majestic job of conjuring a cast of characters who are charismatic, credible and utterly compelling Independent on Sunday Moyes is the queen of the classy weepy and this won't disappoint. Elle

Jojo Moyes is a novelist and a journalist. Her novels include the bestsellers The Girl You Left Behind, The One Plus One, Me Before You and After You. Her novels have been translated into over 40 languages and have hit the Number 1 spot in 10 countries. She is one of the few authors to have had three novels on the New York Times bestseller list at the same time. Me Before You has now sold over 8 million copies worldwide and Jojo adapted the novel into a screenplay, of which the major film production, starring Sam Claflin (The Hunger Games) and Emilia Clarke (Game of Thrones), was released in summer 2016. Jojo lives in Essex with her husband and their three children. Twitter@jojomoyes www.jojomoyes.com