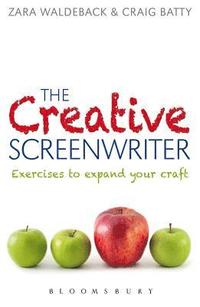 Exercises to Expand Your Craft

av Dr Craig Batty, Zara Waldeback
Häftad Engelska, 2012-03-15
248
Köp
Spara som favorit
Kan levereras innan julafton!
Finns även som
Visa alla 1 format & utgåvor
Creativity is becoming increasingly important in an age of advanced audience sophistication. It's no longer enough to follow standard writing techniques - becoming a first-class screenwriter demands not only a command of craft, but an understanding of how to unleash and harness creativity. "The Creative Screenwriter" offers a wealth of inspiring writing exercises designed to help you produce better, more exciting scripts. Each essential area of screenwriting is covered in its own chapter, from learning how to build stories and finding good ideas, to deepening characters and experimenting with structure, to enhancing scene writing and improving pitching. Finally, a range of innovative DIY Script Surgeries encourage you to find solutions to common screenwriting problems, such as overcoming writer's block, managing the rewrite and selling your work. This is a book to return to again and again. It is a guide for aspiring screenwriters who want to develop a powerful writing practice; a manual for teachers and students seeking discussion and reflection; a bible for professionals wanting to hone their craft and solve script struggles. It will rekindle the creative spark; remind you of why you love writing; and help to express the stories you want to tell - and sell!
Visa hela texten

A manual for teachers and students seeking inspiring exercises to encourage discussion, and a handbook for professionals wanting to hone their craft. * Writers Forum *

Dr Craig Batty is Senior Lecturer in Creative and Professional Writing at RMIT University in Melbourne. He taught screenwriting at several British universities prior to this, including Bournemouth University. He has worked as a writer and script consultant on various short film, feature film, television and online projects. He publishes numerous books and articles on screenwriting and regularly speaks at conferences and festivals around the world. Zara Waldeback is Head Dramaturg on 'Writing for Film and Interactive Media' at Brobygrafiska Hoegskolan, Sweden. She previously taught at Brunel and Sussex Universities in the UK and was programme leader for the MA in Creative Screenwriting at Thames Valley University. She freelances as a Script Consultant, and has worked in development for British Screen, the First Film Foundation and North by Northwest. As a writer she has written scripts with funding from the UK Film Council, Screen South and South East Arts, and developed feature film scripts with Danish and British producers. She specialises in developing effective methods for teaching screenwriting online, has written extensively for ScriptWriter Magazine and is co-author of "Writing for the Screen: Creative and Critical Approaches" (Palgrave Macmillan, 2008).