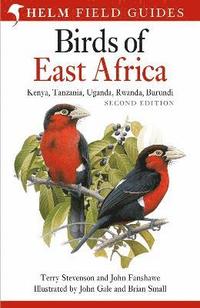 Field Guide to the Birds of East Africa

av Terry Stevenson, John Fanshawe
Häftad Engelska, 2020-11-12
443
Köp
Spara som favorit
Finns även som
Visa alla 3 format & utgåvor
This spectacular new edition of the best-selling Helm field guide of all time covers all resident, migrant and vagrant species found in Kenya, Tanzania, Uganda, Rwanda and Burundi. More than 1,300 species are illustrated with full details of all the plumages and major races likely to be encountered. Concise text describes the identification, status, range, habits and voice, with fully updated range maps for each species. This authoritative book will not only be an indispensable guide to the visiting birder, but also a vital tool for those engaged in work to conserve and study the avifauna of the region - East Africa shelters a remarkable diversity of birds, many seriously endangered with small and vulnerable ranges.
Visa hela texten

Terry Stephenson and John Fanshawe are two names synonymous with East African ornithology. Their first book together, the first edition of this title, was published in 2002 and became an instant field-guide classic. Terry Stevenson has lived in Kenya since 1977. He is one of Africa's foremost bird tour guides, leading tours throughout Africa, India and Eastern Europe. Privately he has travelled extensively, birding in north and south America, Europe, Asia, Australia and to Antarctica. Together with John Fanshawe and Andy Roberts, Terry holds the World Big Day record for the number of birds seen in 24 hours - 330 species on 30 November 1986 - a record that still stands today! He is a co-author of the acclaimed Birds of East Africa, and is member of the East African Rarities Committee. John Fanshawe is an author and environmentalist. He has worked on bird and biodiversity conservation in East Africa since 1981, primarily for the global partnership, BirdLife International. After research on the birds of Arabuko-Sokoke Forest in coastal Kenya, he worked on conservation and development projects there, and went on to co-ordinate BirdLife's global policy and advocacy programmes. With a particular interest in the role of the arts in the environment movement, he co-founded the group New Networks for Nature in 2009, and curates a programme of arts and science collaborations for the Cambridge Conservation Initiative.