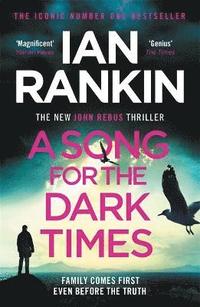 A Song for the Dark Times

av Ian Rankin
(8 röster)
Häftad Engelska, 2021-04-29
116
Köp
Spara som favorit
Finns även som
Visa alla 1 format & utgåvor
From the iconic Number One bestseller Ian Rankin, comes one of the must-read books of the year: A SONG FOR THE DARK TIMES 'Genius ... Only great novels capture the spirit of the age. This is one of them.' THE TIMES * * * * * 'He's gone...' When his daughter Samantha calls in the dead of night, John Rebus knows it's not good news. Her husband has been missing for two days. Rebus fears the worst - and knows from his lifetime in the police that his daughter will be the prime suspect. He wasn't the best father - the job always came first - but now his daughter needs him more than ever. But is he going as a father or a detective? As he leaves at dawn to drive to the windswept coast - and a small town with big secrets - he wonders whether this might be the first time in his life where the truth is the one thing he doesn't want to find... PRAISE FOR A SONG FOR THE DARK TIMES: 'Magnificent ... utterly unputdownable and an immersive pleasure' MARIAN KEYES 'This is Rankin at his best, Rebus at his best, storytelling that meets the moment and transcends all genres and expectations' MICHAEL CONNELLY 'An outstanding addition to one of the finest bodies of work in crime fiction' MICK HERRON 'Rankin remains the king of the castle' THE TIMES 'Typically compelling' DAILY TELEGRAPH 'Masterly storytelling' SUNDAY EXPRESS 'Excellent' LIZ NUGENT 'The best that the crime genre can offer' FT 'Rankin grows better with time . . . Rebus grows ever more compelling' DAILY MAIL * * * * * PRAISE FOR THE ICONIC NUMBER ONE BESTSELLER: 'Ian Rankin is a genius' LEE CHILD 'A master storyteller' GUARDIAN 'Rebus is one of British crime writing's greatest characters: alongside Holmes, Poirot and Morse' DAILY MAIL 'Great fiction, full stop' THE TIMES 'One of Britain's leading novelists in any genre' NEW STATESMAN 'Rankin is a phenomenon' SPECTATOR 'Worthy of Agatha Christie at her best' SCOTSMAN 'The king of crime fiction' SUNDAY EXPRESS
Visa hela texten

For more than three decades Ian Rankin has been out in front of the pack, delivering the best books out there, raising the bar each and every time. A Song For The Dark Times proves it. This is Rankin at his best, Rebus at his best, storytelling that meets the moment and transcends all genres and expectations. -- MICHAEL CONNELLY Magnificent ... utterly unputdownable and an immersive pleasure. I loved it. -- MARIAN KEYES An outstanding addition to one of the finest bodies of work in crime fiction. -- MICK HERRON Only great novels capture the spirit of the age. This is one of them. * THE TIMES * There is a sense of warmth and freedom in this novel, as though Rebus's retirement has liberated his creator as much as himself. * LITERARY REVIEW * Rankin's affection for his character remains undimmed, even as he writes with candour about [Rebus's] failure as a father. * THE SUNDAY TIMES * ...masterly storytelling * SUNDAY EXPRESS * Another class act from a storyteller who makes it seem effortless. * SUNDAY MIRROR * ...a gripping, complex mystery * MAIL ON SUNDAY * [A Song for the Dark Times] is vintage Rankin - which is to say, the best that the crime genre can currently offer. * FINANCIAL TIMES * No matter how dark the times, the arrival of a Rankin novel remains one of life's pleasures. -- Matt Nixson * DAILY EXPRESS *

Born in the Kingdom of Fife in 1960, Ian Rankin graduated from the University of Edinburgh in 1982, and then spent three years writing novels when he was supposed to be working towards a PhD in Scottish Literature. His first Rebus novel was published in 1987, and the Rebus books are now translated into thirty-six languages and are bestsellers worldwide.Ian Rankin has been elected a Hawthornden Fellow, and is also a past winner of the Chandler-Fulbright Award. He is the recipient of four CWA Daggers including the prestigious Diamond Dagger in 2005. In 2004, Ian won America's celebrated Edgar Award. He has also been shortlisted for the Anthony Award in the USA, won Denmark's Palle Rosenkrantz Prize, the French Grand Prix du Roman Noir and the Deutscher Krimipreis. Ian Rankin is also the recipient of honorary degrees from the universities of Abertay, St Andrews, Edinburgh, Hull and the Open University.A contributor to BBC2's Newsnight Review, he also presented his own TV series, Ian Rankin's Evil Thoughts. Rankin is a No.1 bestseller in the UK and has received the OBE for services to literature, opting to receive the prize in his home city of Edinburgh, where he lives with his partner and two sons. www.ianrankin.net Twitter @Beathhigh