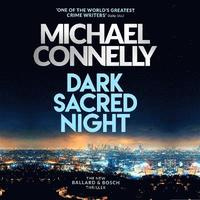 A Ballard and Bosch Thriller

av Michael Connelly
CD-bok Engelska, 2018-10-30
409
Köp
Spara som favorit
Finns även som
Visa alla 3 format & utgåvor
Detective Renee Ballard is working the graveyard shift again, and returns to Hollywood Station in the early hours only to find that an older man has snuck in and is rifling through old file cabinets. The intruder is none other than legendary LAPD detective Harry Bosch, working a cold case that has gotten under his skin. Ballard kicks him out, but eventually Bosch persuades her to help and she relents. Bosch is investigating the death of fifteen-year-old Daisy Clayton, a runaway who was brutally murdered. He crossed paths with her devastated mother while working a previous case, and Daisy's story has seized hold of him. Now, Ballard joins forces with Bosch and his former partner Lucia Soto to find out what happened to Daisy and finally bring her killer to justice... (p) Hachette Book Group US 2018
Visa hela texten

Taut in style and sombre in tone, Dark Sacred Night finds the formerly morally incorruptible Bosch journeying into darkness even as he rages against the dying of the light -- Declan Burke * IRISH TIMES * This is a must-read detective novel, for this or any year. -- Michael Carlson * IRRESISTIBLE TARGETS * Detective Renee Ballard, who made her first appearance in last year's The Late Show, returns here in the company of Connelly's long-standing serial character Harry Bosch, now retired from the LAPD and working on cold cases for the San Fernando Police Department...Connelly keeps all the plates - including the porn industry, corrupt cops and a religious zealot - spinning beautifully as the pair battle to find the truth -- Laura Wilson * THE GUARDIAN * Ballard and Bosch could not be more different, and yet they are hewn from the same rock -- Mark Sanderson * EVENING STANDARD * A new masterpiece. It's suspenseful and surprisingly moving. After 31 bestsellers he just keeps getting better. This one will fuel ones to come, as it unites veteran LA detective Harry Bosch and his newest creation, fesity detective Renee Ballard...What a team! What a hit! -- Alex Gordon * PETERBOROUGH EVENING TELEGRAPH * Brilliant written in Connelly's inimitable descriptive style and compulsively readable, we keep company with his characters in the traffic jams of LA and the endless cheap diners where the cops catch their breakfast after an all-nighter. The intertwining of character is as fascinating as the cases they confront, and we are along breathlessly for the whole ride. We can only hope that the team of Ballard and Bosch will run for some years to come. -- Marina Vaizey * THE ARTS DESK * Connelly's most famous creation, retired LAPD detective Harry Bosch,, teams up with detective Renee Ballard to solve the 2009 murder of a 15-year-old runaway in a gripping, fast-paced story. * MAIL ON SUNDAY *

MICHAEL CONNELLY is the author of thirty-four previous novels, including the #1 New York Times bestsellers Dark Sacred Night, Two Kinds of Truth, and The Late Show. His books, which include the Harry Bosch series and the Lincoln Lawyer series, have sold more than eighty million copies worldwide. Connelly is a former newspaper reporter who has won numerous awards for his journalism and his novels. He is the executive producer of Bosch, starring Titus Welliver, and the creator and host of the podcast Murder Book. He spends his time in California and Florida. To find out more, visit Michael's website or follow him on Twitter or Facebook. www.michaelconnelly.com f/MichaelConnellyBooks t@Connellybooks Christine Lakin : Probably best known for her role as "Al" in the 90's sit-com Step By Step, CHRISTINE LAKIN has appeared in dozens of films and television shows, including CSI, Melissa and Joey, Valentines Day and You Again. Her website is www.christine-lakin.com. Titus Welliver: TITUS WELLIVER is a distinguished actor and painter. He has appeared in several highly acclaimed films and television shows, including Transformers: Age of Extinction, The Town, Argo, Lost, The Good Wife, Grimm, and Sons of Anarchy. Titus plays Harry Bosch in the Amazon series Bosch. He also read The Crossing and The Burning Room by Michael Connelly for Hachette Audio.