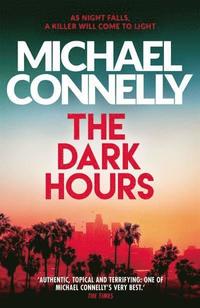 av Michael Connelly
Häftad Engelska, 2022-05-12
105
Köp
Spara som favorit
Finns även som
Visa alla 1 format & utgåvor
A CRIME BURIED FOR YEARS. AND ONE THAT'S JUST BEGUN... 'An authentic, topical and terrifying thriller: one of Michael Connelly's very best' THE TIMES 'Yet another superb thriller from a writer at the top of his game' SUNDAY EXPRESS 'Consistently excellent' MAIL ON SUNDAY * * * * * A MURDER YEARS IN THE MAKING A murder in the middle of a street party seems a senseless tragedy. But the victim had a dark past which came back to haunt him. THE DEEPER YOU LOOK Detective Renee Ballard connects the killing to an unsolved case last worked by ex-LAPD legend Harry Bosch. But then a new crime shatters the night shift... THE DARKER IT GETS The Midnight Men are a deadly pair of predators who stalk the city during the dark hours and disappear without a trace. Ballard once believed her job was to bring the truth to light. In a police department shaken to the core by protests and pandemic, both cases have the power to save her - or end her... * * * * * CRIME DOESN'T COME BETTER THAN CONNELLY: 'One of the very best writers working today' Sunday Telegraph 'The pre-eminent detective novelist of his generation' Ian Rankin 'The best mystery writer in the world' GQ 'A superb natural storyteller' Lee Child 'A master' Stephen King 'Crime thriller writing of the highest order' Guardian 'America's greatest living crime writer' Daily Express 'A crime writing genius' Independent on Sunday
Visa hela texten

Consistently excellent... The plotting is as skilful as ever, and the pacing as relentless * Mail On Sunday * The Dark Hours is yet another superb thriller from a writer at the top of his game * Sunday Express * An authentic, topical and terrifying thriller: one of Michael Connelly's very best. * THE TIMES * Thoroughly engrossing ... The Dark Hours offers plenty of shocking scenes and clever surprises * Wall Street Journal * Ballard and Bosch are a great combination as they work in and around a police force that Ballard believes too often aims to 'protect and serve the image instead of the citizens.' * Washington Post * A masterpiece * Publishers Weekly * Relentless on their own, Ballard's and Bosch's combined skills...could be combustible * LA Times *

MICHAEL CONNELLY is the author of thirty-four previous novels, including the #1 New York Times bestsellers Dark Sacred Night, Two Kinds of Truth, and The Late Show. His books, which include the Harry Bosch series and the Lincoln Lawyer series, have sold more than eighty million copies worldwide. Connelly is a former newspaper reporter who has won numerous awards for his journalism and his novels. He is the executive producer of Bosch, starring Titus Welliver, and the creator and host of the podcast Murder Book. He spends his time in California and Florida. To find out more, visit Michael's website or follow him on Twitter or Facebook. www.michaelconnelly.com f/MichaelConnellyBooks t@Connellybooks