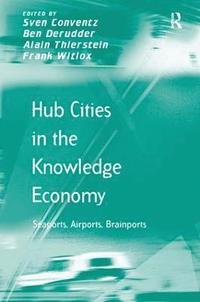 Hub Cities in the Knowledge Economy

av Ben Derudder, Frank Witlox, Sven Conventz, Alain Thierstein
Inbunden Engelska, 2014-01-28
1680
Köp
Spara som favorit
Kan levereras innan julafton!
Finns även som
Visa alla 3 format & utgåvor
The overarching research topic addressed in this book is the complex and multifaceted interaction between infrastructural accessibility/connectivity of city-regions on the one hand and knowledge generation in these city-regions on the other hand. To this end, the book brings together chapters analysing how infrastructural accessibility is related to changing patterns of business location of knowledge-intensive industries in city-regions. The chapters in this book specifically dwell on recent manifestations of and developments in the accessibility/knowledge-nexus, with a particular metageographical focus on how this materializes in major city-regions. In the different chapters, this shifting relation is broached from different perspectives (seaports, airports, brainports), at different scales (ranging from global-scale analyses to case studies), and by adopting a variety of methodologies (straddling the wide variety of methodological approaches currently adopted in human geography research). Researchers contributing to this edited volume come from different scholarly backgrounds (sociology, human geography, regional planning), which allows for a varied treatise of this research topic.
Visa hela texten

'The remarkable ideas presented in this book offer a valuable window on the connections between mobility networks, knowledge generation and development, for students, academics and policy makers to consider, especially after the economic crisis of 2008 which has affected some countries so deeply. The powerful topic of this work, new and multiple forms of connectivity, guides us through the thought-provoking and clarifying points made about the geography of world cities and world city regions.' CA!ndida Gago, Complutense University of Madrid, Spain 'Working across diverse disciplinary fields and geographical scales, the contributors to this rigorous and readable volume show how the infrastructures of transportation and personal mobility combine with local and global networks of knowledge creation and exchange in privileged urban places. The insights and evidence presented are essential for understanding why some city-regions occupy a dominant position in today's global economy.' Peter V. Hall, Simon Fraser University, Canada 'For anyone interested in the intersections between infrastructure, connectivity and territorial and networked forms of knowledge production in major city-regions, this is an indispensable collection. It contains a treasure trove of detailed empirical case studies, which significantly advance our understanding of the multiple dimensions of knowledge hubs in the global economy.' Michael Hoyler, Loughborough University, UK