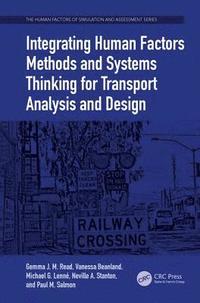 av Vanessa Beanland, Michael G Lenne, Neville A Stanton, Paul M Salmon, Gemma J M Read
Inbunden Engelska, 2017-07-26
1639
Köp
Spara som favorit
Governments and road safety agencies around the world have either introduced or are considering 'safe system' strategies, a long overdue acknowledgement that different elements of the road system contribute to road safety outcomes. Human factors approaches have a leading role here in both conceptualising the road system as a complex sociotechnical system and in providing practical approaches to support true systems-based countermeasures. This book illustrates the potential for integrating contemporary systems-based human factors methods with modern day driving-assessment methods, such as vehicle instrumentation and driving simulation, to understand and enhance performance in modern day road-transport systems. The book outlines why a fundamental paradigm shift is needed in the way these systems are designed and operated, and illustrates how a wide range of accepted human-factors approaches can be applied successfully to road transport to revolutionise the countermeasure design process. The practical illustrations of these human factors methods are applied to a long-standing road and rail safety issue: rail level crossings, where the road and rail systems intersect. The final chapter of the book highlights the utility of the human factors approach to reducing road trauma and discusses future applications of the approach.
Visa hela texten

Dr Gemma Read Gemma Read, PhD, is a Research Fellow at the Centre for Human Factors and Sociotechnical Systems at the University of the Sunshine Coast. She completed her PhD in human factors at the Monash University Accident Research Centre in 2015, focused on the development of a design toolkit for use with cognitive work analysis. Prior to this she completed a postgraduate diploma in psychology and undergraduate degrees in behavioural science and law. Gemma has over ten years' experience applying human factors methods in transportation safety, predominantly within the area of transport safety regulation. Dr Vanessa Beanland Vanessa Beanland, PhD, is a Research Fellow in the Centre for Human Factors and Sociotechnical Systems at University of the Sunshine Coast. She completed her PhD in experimental psychology in 2011 and previously worked as a Lecturer at the Australian National University and a Research Fellow at Monash University Accident Research Centre. Vanessa currently holds an Australian Research Council Discovery Early Career Research Award in the area of driver behaviour and has more than eight years' research experience encompassing applied psychology and human factors in transport. Professor Michael Lenne Mike Lenne, PhD, is an Adjunct Professor (Research) at Monash University Accident Research Centre. He obtained a PhD in human factors psychology in 1998, and has since worked in a number of research roles in university and government settings, all with a focus on improving transport safety. For seven years he led the human factors research team at Monash University Accident Research Centre, and in 2014 he became a Professor in human factors. In late 2014 his unique expertise in human factors and research translation were recognised through the creation of the role of Chief Scientific Officer, Human Factors at Seeing Machines Ltd. Mike has dedicated his research career to measuring human operator performance in transport settings and in developing and evaluating measures to improve safety. Professor Neville Stanton Neville Stanton, PhD, DSc, is a Chartered Psychologist, Chartered Ergonomist and Chartered Engineer. He holds the Chair in human factors engineering in the Faculty of Engineering and the Environment at the University of Southampton. He has degrees in occupational psychology, applied psychology and human factors engineering. His research interests include modelling, predicting, analysing and evaluating human performance in systems as well as designing the interfaces and interaction between humans and technology. Professor Stanton has worked on design of automobiles, aircraft, ships and control rooms over the past 30 years, on a variety of automation projects. He has published 35 books and over 270 journal papers on ergonomics and human factors. His work has been recognised through numerous awards including the Hodgson Prize, awarded to him and his colleagues in 2006 by the Royal Aeronautical Society for research on design-induced, flight-deck, error. He has also received numerous awards from the Institute of Ergonomics and Human Factors in the UK and in 2014 the University of Southampton awarded him a Doctor of Science for his sustained contribution to the development and validation of human factors methods. Professor Paul Salmon Paul Salmon, PhD, is a Professor in human factors and is the creator and director of the Centre for Human Factors and Sociotechnical Systems at University of the Sunshine Coast. He currently holds an Australian Research Council Future Fellowship in the area of transportation safety and leads major research programs in the areas of road and rail safety, cybersecurity, and led outdoor recreation. His current research interests include accident prediction and analysis, distributed cognition, systems thinking in transportation safety and healthcare, and human factors in elite sports and cybersecurity. Paul has co-authored 11 books, over 150 journal articles, and numerous c