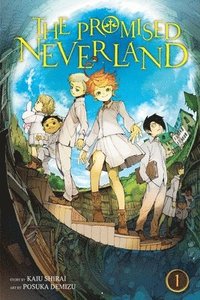 av Kaiu Shirai
(3 röster)  |  Läs 1 recension
Häftad Engelska, 2017-12-14
126
Köp
Spara som favorit
The children of the Grace Field House orphanage have their happy lives upended when they find out they're being raised to be fed to demons. Can they escape their fate before it's too late? Life at Grace Field House has been good for Emma and her fellow orphans. While the daily studying and exams they have to take are tough, their loving caretaker provides them with delicious foods and plenty of playtime. But perhaps not everything is as it seems... Emma, Norman and Ray are the brightest kids at the Grace Field House orphanage. And under the care of the woman they refer to as "Mom," all the kids have enjoyed a comfortable life. Good food, clean clothes and the perfect environment to learn-what more could an orphan ask for? One day, though, Emma and Norman uncover the dark truth of the outside world they are forbidden from seeing. Shonen Jump's big hit of 2017, a masterful suspense story illustrated by up-and-coming artist Posuka Demizu. * Releases 2 times a year for 2+ volumes. Series is ongoing. * Art show in Japan featuring Posuka Demizu's art in December 2016. * Weekly simultaneous serialization in VIZ Media's Weekly Shonen Jump digital magazine. * Will appeal to fans of mainstream Shonen Jump series like Assassination Classroom and Death Note.
Visa hela texten

Kaiu Shirai debuted in 2015 with Ashley Gate no Yukue on the Shonen Jump+ website. Shirai first worked with Posuka Demizu on the two-shot Poppy no Negai, which was released in February 2016. Posuka Demizu debuted as a manga artist with the 2013 CoroCoro series Oreca Monster Bouken Retsuden. A collection of illustrations, The Art of Posuka Demizu, was released in 2016 by PIE International.