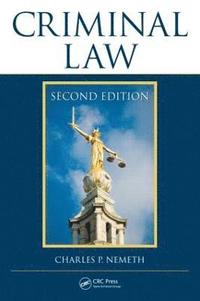 av Charles P Nemeth
Inbunden Engelska, 2011-11-16
1529
Köp
Spara som favorit
Finns även som
Visa alla 2 format & utgåvor
In order to fully grasp criminal law concepts, students must go beyond mere rote memorization of the penal code and attempt to understand where the laws originate from and how they have developed. Criminal Law, Second Edition blends legal and moral reasoning in the examination of crimes and explores the history relating to jurisprudence and roots of criminal law. It fosters discussions of controversial issues and delivers abridged case law decisions that target the essence of appellate rulings. Grounded in the model penal code, making the text national in scope, this volume examines: Why the criminal codes originated, and the moral, religious, spiritual, and human influences that led to our present system How crimes are described in the modern criminal justice model The two essential elements necessary for criminal culpability: actus reus (the act committed or omitted) and mens rea (the mind and intent of the actor) Offenses against the body resulting in death, including murder, manslaughter, felony murder, and negligent homicide Nonterminal criminal conduct against the body, including robbery, kidnapping, false imprisonment, assault, and hate crimes Sexual assault, rape, necrophilia, incest, and child molestation Property offenses, such as larceny/theft, bribery, forgery, and embezzlement Crimes against the home, including burglary, trespass, arson, and vandalism The book also examines controversial public morality issues such as prostitution, drug legalization, obscenity, and pornography. The final two chapters discuss inchoate offenses, where the criminal act has not been completed, and various criminal defenses such as legal insanity, entrapment, coercion, self-defense, and mistake of fact or law. Important keywords introduce each chapter, and discussion questions and suggested readings appear at the end of each chapter, prompting lively debate and further inquiry into a fascinating subject area that continues to evolve.
Visa hela texten

Dr. Nemeth has spent the vast majority of his professional life in the study and practice of law and justice. A recognized expert on ethics and the legal system, appellate legal practice and private-sector justice, he also is a prolific writer, having published numerous texts and articles on law and justice throughout his impressive career. He has been an educator for more than 30 years. He holds memberships in the New York, North Carolina and Pennsylvania bars. Dr. Nemeth is soon to be Chair and Professor of Security, Fire and Emergency Services at John Jay College of Criminal Justice in New York City. He is a much-sought-after legal consultant for security companies and a recognized scholar on issues involving law and morality.