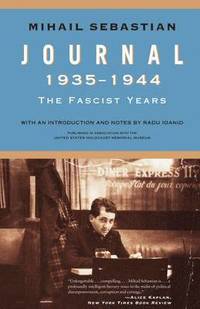 av Mihail Sebastian
Häftad Engelska, 2012-11-07
598
Köp
Spara som favorit
Finns även som
Visa alla 1 format & utgåvor
Hailed as one of the most important portrayals of the dark years of Nazism, this powerful chronicle by the Romanian Jewish writer Mihail Sebastian offers a lucid and finely shaded analysis of erotic and social life, a Jew's diary, a reader's notebook, a music-lover's journal. Despite the pressure of hatred and horror in the "huge anti-Semitic factory" that was Romania in the years of World War II, his writing maintains the grace of its perceptive and luminous intelligence. The legacy of a journalist, novelist, and playwright, Sebastian's Journal stands as one of the most important human and literary documents of the climate that preceded the Holocaust in Eastern Europe.
Visa hela texten

This extraordinary personal diary, describing, day by day, the 'huge anti-Semitic factory' that was Romania in the late 1930s and early 1940s, deserves to be on the same shelf as Anne Frank's Diary and to find as huge a readership. Sebastian is no child, however-his is a sophisticated literary mind observing in horror, and then portraying with a fluid, lucent pungency, the cruelty, cowardice, and stupidity of his worldly Gentile friends in Bucharest's urban cultural elite as they voluntarily transform themselves into intellectual criminals and, allied with the Nazis, participate with fanatical conviction in 'an anti-Semitic delirium that nothing can stop.' -- Philip Roth This book is alive, a human soul lives in it, along with the unfolding ghastliness of the last century, which passed an inch away from Sebastian's nose. Here is a life whose spell will last a long time. -- Arthur Miller An extraordinary testimonial... The sickening coziness of artistic and political worlds in fascist Romania is caught in the very process of 'rhinocerization,' to use Eugene Ionesco's famous coinage... Sebastian's Journal is an uncomfortable and convincing reminder that the Romanian, indeed European, intellectual milieu still had something morally rotten at its core. This book rises from the debris of pre-war verbiage like a man from a pile of corpses. -- Andrei Codrescu This journal stands as one of the most important human and literary documents of the pre-Holocaust climate in Romania and Eastern Europe... Remarkable. -- Norman Manea, author of "The Hooligan's Return" Like all great works, Journal generates its own actuality. Discovering and reading it today, more than half a century after it was written, is a shattering and overwhelming experience. What is particularly admirable in this diary is Mihail Sebastian himself: he cannot help remembering that these fascists have been his former friends during their common youth, and he is able to feel sorrow when one of them dies. Even when he is himself marked and hunted, even when his own life is at stake, even when the horror culminates in the massacre at Jassy, even when he is beyond disgust and revulsion, he never loses his sense of justice, nor his humanity. He remains through and through a Just. -- Claude Lanzmann Unforgettable ... compelling... Mihail Sebastian is an unparalleled diarist ... a profoundly intelligent literary voice in the midst of political disempowerment, corruption and carnage. -- Alice Kaplan The New York Times Book Review Rightly compared to Viktor Klemperer's great diary of life under the Nazis, I Will Bear Witness... Critics have commented that Sebastian, being more literary ... was the more elegant writer. Both diaries are indispensable... From now on, the history of Fascist Romania and Nazi Germany cannot be written without them. -- Peter Gay The New York Review Of Books Sebastian's Journal proves to be one of the most important testimonies of the Jewish tragedy during that period, comparable to Primo Levi's Survival in Auschwitz or the diary of Anne Frank. Unlike Levi and Frank, who write from inside Hell, portraying life in the concentration camps or in hiding, Sebastian writes with honesty and analytic acuity from the purgatory of his own room in Bucharest, where he lives with the impending danger of deportation and death, questioning the moments of ease that his provisional freedom allows him: the enjoyment of music, of love affairs, of reading books, writing, or learning English. The New Yorker Nuanced, gracefully written, spellbinding, gripping, and eloquent. National Public Radio Searing ... haunting. Parade Magazine

Mihail Sebastian was born in 1907 to a middle-class Jewish family in the Danube port of Braila; he died in an automobile accident in the spring of 1945. During the period between the wars, he was well known for his lyrical and ironic plays and for urbane psychological novels tinged with melancholy, as well as for his extraordinary literary essays.