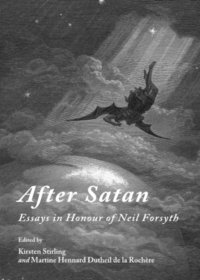 Essays in Honour of Neil Forsyth

av Martine Hennard Dutheil De La Rochere, Kirsten Stirling
E-bok (PDF - DRM), Engelska, 2010-07-12
839
Ladda ned
Spara som favorit
Laddas ned direkt
Läs i vår app för iPhone, iPad och Android
This volume is the result of a collective desire to pay homage to Neil Forsyth, whose work has significantly contributed to scholarship on Satan. This volume is &quoteafter&quote Satan in more ways than one, tracing the afterlife of both the satanic figure in literature and of Neil Forsyth's contribution to the field, particularly in his major books The Old Enemy: Satan and the Combat Myth (Princeton University Press, 1987, revised 1990) and The Satanic Epic (Princeton University Press, 2003). The essays in this volume draw on Forsyth's work as a focus for their analyses of literary encounters with evil or with the Devil himself, reflecting the richness and variety of contemporary approaches to the age-old question of how to represent evil. All the contributors acknowledge Neil Forsyth's influence in the study of both the Satan-figure and Milton's Paradise Lost. But beyond simply paying homage to Neil Forsyth, the articles collected here trace the lineage of the Satan figure through literary history, showing how evil can function as a necessary other against which a community may define itself. They chart the demonised other through biblical history and medieval chronicle, Shakespeare and Milton, to nineteenth-century fiction and the contemporary novel. Many of the contributors find that literary evil is mediated through the lens of the Satan of Paradise Lost, and their articles address the notion, raised by Neil Forsyth in The Satanic Epic, that the literary Devil-figures under consideration are particularly interested in linguistic ambivalence and the twisted texture of literary works themselves. The multiple responses to evil and the continuous reinvention of the devil figure through the centuries all reaffirm the textual presence of the Devil, his changing forms necessarily inscribed in the shifting history of western literary culture. These essays are a tribute to the work of Neil Forsyth, whose scholarship has illuminated and guided the study of the Devil in English and other literatures.
Visa hela texten