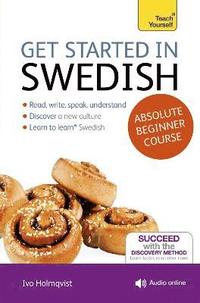 av Vera Croghan, Ivo Holmqvist
Mixed media product Engelska, 2013-12-27
365
Köp
Spara som favorit
Do you want a solid foundation to your Swedish studies? If you are looking for a solid foundation to your language studies for school, work or travel, this engaging course will get you speaking, writing, reading and understanding Swedish in no time. Through authentic conversations, clear language presentations, and extensive practice and review, you will learn the Swedish you need to communicate naturally in everyday situations - from booking a hotel room to talking about friends and family. What will I learn? Basic Swedish is slowly and carefully introduced to ensure you progress confidently through the course and build up a foundation to allow you to feel confident in everyday situations and move to the next level of your learning. It teaches grammar, vocabulary and listening, reading, writing, speaking and pronunciation skills. By the end of the course you will reach a solid Novice High proficiency level of ACTFL (The American Council for the Teaching of Foreign Languages) and A2 Beginner level of the CEFR (Common European Framework of Reference for Languages) guidelines. Is this course for me? Get Started in Swedish is for absolute and false beginners of Swedish. Clear and simple explanations make the course appropriate and accessible to anyone learning Swedish. There are extensive illustrations to support the learner working on his or her own. This course is also ideal to use with one-to-one tutoring and as a classroom course. What do I get? This book has a learner-centred approach that incorporates the following features: - 10 units of learning content - covering everyday topics from booking a hotel room to talking about friends and family - Discovery Method - figure out rules and patterns yourself to make the language stick - Outcomes-based learning - focus your studies with clear aims - Vocabulary building - thematic lists and activities to help you learn vocabulary quickly - Test yourself - see and track your own progress - Native speaker audio - available to stream online or download to the Teach Yourself Library app. Access the audio for this course for free by downloading it to the Teach Yourself Library app or streaming it on library.teachyourself.com Where do I go next? If you want to advance your Swedish, our Complete Swedish course (9781444107173) will take you to an intermediate level of Swedish. If you want to practice your speaking and listening skills, Get Talking and Keep Talking Swedish (9781444184228) is the perfect audio course. Rely on Teach Yourself, trusted by language learners for over 80 years
Visa hela texten

Vera Croghan started teaching Swedish at Aberdeen University straight after her second degree from Lund University, Sweden. After her marriage, she moved to Edinburgh where she gave private lessons and translated and interpreted for the Swedish Consul and businesses. She began teaching at the University of East Anglia when it opened in 1963 and taught there for 30 years. Professor Ivo Holmqvist has taught Scandinavian literature at the universities of Lund, Odense, Ghent and Auckland.