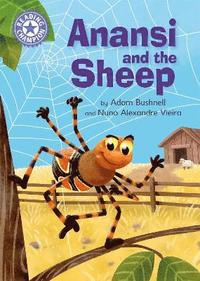 Reading Champion: Anansi and the Sheep

av Adam Bushnell
Inbunden Engelska, 2020-06-25
135
Köp
Spara som favorit
Finns även som
Visa alla 1 format & utgåvor
This story is part of Reading Champion, a series carefully linked to book bands to encourage independent reading skills, developed with Dr Sue Bodman and Glen Franklin of UCL Institute of Education (IOE) Anansi the spider is clever and helpful. When he comes across a sad and hungry sheep, Anansi decides to help the sheep find greener pastures. Along the way, he must also save them both from hungry wild beasts! Come along with Anansi and the Sheep on this fun mash-up of traditional stories! Reading Champion offers independent reading books for children to practise and reinforce their developing reading skills. Fantastic, original stories are accompanied by engaging artwork and a reading activity. Each book has been carefully graded so that it can be matched to a child's reading ability, encouraging reading for pleasure.
Visa hela texten

Adam Bushnell (Author) Adam is a former teacher who turned his hand to writing full time in 2007. He has written both adult teaching guides and children's fiction books and is often touring schools and libraries and running creative writing sessions. He lives in Durham. Nuno Alexandre Vieira (Illustrator) Nuno loves to work with traditional media (oils, watercolour, acrylics, Indian ink), digital or a mix between the two of them. He especially loves to create characters and imagine worlds for them. Fairy tales, magic and adventure stories are his favourite subjects to illustrate. Always pursuing his ambition of being an artist, he became an Art teacher, and doing part time illustration work. After teaching for almost fourteen years, he decided to become a full-time illustrator. Since then he has contributed to several educational publications, comic books and illustrated several children's books.