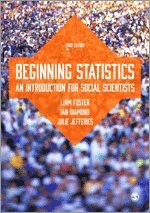 An Introduction for Social Scientists

av Liam Foster
Inbunden Engelska, 2014-11-18
1189
Köp
Spara som favorit
Finns även som
Visa alla 2 format & utgåvor
In the Second Edition of this bestselling textbook, the authors use real-world examples to introduce basic principles in statistics with no prior knowledge or experience assumed. With an emphasis on describing concepts, showing through example and illustrating points with graphs and displays, this book will provide readers with a step-by-step introduction to using statistics.

The authors of Beginning Statistics have written an ideal text for those students who are unfamiliar with and often petrified about statistical analysis. They have written a book that is comprehensive and which is made accessible by a writing style that eases the reader through explanations of complex ideas and uses lots of examples and exercises to facilitate understanding. They should be congratulated for writing such a clear but rigorous book.

This book very neatly steps from definition to worked example and interpretation with the writing lively and clear. The first edition has been my ‘go to’ jargon buster textbook whenever I or a student need statistical language or calculations explaining transparently and I welcome the second edition with its updated examples.

Simple, brilliant, thoroughly entertaining – a logical and succinct introduction to essential social statistics pitched at the right level for beginners. The latest edition has several extended spotlights including a comprehensive annotation of statistics and its application in the real ‘big data’ world, illustrative examples based on recent data, and most of all reflective learning outcomes for each chapter. I am convinced that this book is an indispensable resource for all under- and post-graduate students and social science researchers, highly recommended!

Much of Liams research continues to focus on inequalities in later life and policy implications, particularly in relation to pensions. He has liaised with the Labour Party, Trade Unions, the European Parliament and pension providers and published extensively in this area. Liam is also interested in theories of ageing including the political economy of ageing and the implementation of active ageing policy and has recently published (with Professor Alan Walker) (eds) (2014) The Political Economy of Ageing and Later Life: Critical Perspectives with Edward Elgar.

Liam employs a variety of methods in his research which inform his teaching, including secondary data analysis. He has been teaching social research methods to students in the social sciences for approximately ten years with a particular focus on quantitative methods. He has also developed quantitative teaching resources for teachers in the social sciences and written about teaching social research methods.

In his spare time Liam enjoys playing and watching football (Sheffield Wednesday), spending time with his family, sampling real ale and collecting an eclectic mix of vinyl and cds.

Julie is a demographer by background. After graduating in Population Studies from the University of Southampton in 1994, she worked as a Teaching Fellow in the Social Statistics department for over seven years. Julies main role was teaching social science undergraduates at Southampton both introductory statistics and population science courses, while completing a PhD on childbearing following marital dissolution in Britain.

The first edition of Beginning Statistics grew from several years of experience in teaching quantitative methods with Ian, both in huge lecture theatres and small tutorial groups, to students from a wide range of degree courses and with diverse abilities and initial levels of enthusiasm!

Since 2002, Julie has worked on population figures at the Office for National Statistics. She is currently head of the Demographic Analysis Unit, which produces publications and research on the topics of childbearing, families, life expectancy and the ageing population. Julie is pleased to maintain links with the University of Southampton as part of this role. Julie is also a...