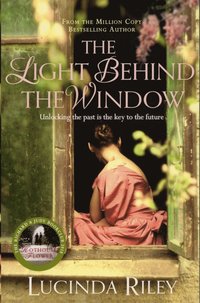 The Light Behind The Window

Unlocking the past ist the key to the future

av Lucinda Riley
(4 röster)
Häftad Engelska, 2012-08-30
132
Köp
Spara som favorit
From the author of the bestselling Seven Sisters series, Lucinda Riley's The Light Behind the Window is a breathtaking and intense story of love, war and, above all, forgiveness. The present: Emilie de la Martinieres has always fought against her aristocratic background, but after the death of her glamorous, distant mother, she finds herself alone in the world and sole inheritor of her grand childhood home in the south of France. An old notebook of poems leads her in search of the mysterious and beautiful Sophia, whose tragic love affair changed the course of her family history. As Emilie unravels the story, she too embarks on her own journey of discovery, realizing that the chateau may provide clues to her own difficult past and finally unlock the future. The past: London 1943. A young office clerk, Constance Carruthers, is drafted into the SOE, arriving in occupied Paris during the climax of the conflict. Separated from her contact in her very first hours in France, she stumbles into the heart of a wealthy family who are caught up in a deadly game of secrets and lies. Forced to surrender her identity and all ties to her homeland and her beloved husband, Constance finds herself drawn into a complex web of deception, the repercussions of which will affect generations to come. 'A fast-paced, suspenseful story flitting between the present day and World War II . . . Brilliant escapism' - Red **Note to readers: In the US, this book is published under the title The Lavender Garden.**
Visa hela texten

A sweeping, engrossing work. Riley is talented, delighting in the small details of aristocratic luxury and the pastoral countryside . . . The heroines of [The Light Behind the Window] struggle to master circumstances seemingly beyond their control, a common thread in Riley's work. A tale of family secrets, wartime espionage, and loyalties gained and gambled, The Lavender Garden will appeal to fans of historical fiction, Kate Morton, and Helen Bryan -- <i>Booklist</i> A fast-paced, suspenseful story flitting between the present day and World War II . . . Riley expertly weaves Emilie's story into a dual narrative . . . A real old-fashioned romance which manages to have a compelling narrative as well as something of a history lesson in the Special Operations Executive. Brilliant escapism -- <i>Red</i> Two superb storylines for the price of one here. In 1998 Emilie de la Martinieres inherits her grand South of France childhood home. She begins to uncover the past and finds a tiny room hidden in the wine cellar. Why has it been sealed for 50 years? As if that wasn't enough, there's also the part set in 1944. Constance Carruthers is sent to Paris as a spy, but loses her contact and falls in with an aristocratic family involved with the Resistance. Seriously, what could be more divine? Just sink in and wallow -- Kate Saunders, <i>Saga</i> A beautifully written book that secures Riley's authorial status and proves that her golden penmanship is no mere fluke . . . This is the perfect literary novel to move those readers who wish for something more fulfilling than chick-lit, yet just as entertaining, witty and heart-stopping. The language is dramatic yet truthful and Riley has such a delicate touch with mystery and intrigue that it's difficult to predict where the plot is going . . . Riley's descriptive nuances are so evocative a TV drama is bound to be imminent. A literal and literary page-turner -- WeLoveThisBook.co.uk Yet again, I have been totally entertained by another great story that is well written with an intricate plot that is multi-layered but tied together so well . . . I became really emotionally attached to these characters . . . This novel really is a joy to read, expertly woven together and mixing social history with family dramas and love and relationships - the perfect blend -- RandomThingsThroughMyLetterbox.blogspot.co.uk

Lucinda Riley was born in 1965 in Ireland, and after an early career as an actress in film, theatre and television, wrote her first book aged twenty-four. Her books have been translated into thirty-seven languages and continue to strike an emotional chord with all cultures around the world. The Seven Sisters series specifically has become a global phenomenon, creating its own genre, and there are plans to create a seven-season TV series. Her books have been nominated for numerous awards, including the Italian Bancarella prize, The Lovely Books award in Germany, and the Romantic Novel of the Year award. In 2020 she received the Dutch Platinum award for sales over 300,000 copies for a single novel in one year - an award last won by J K Rowling for Harry Potter. In collaboration with her son Harry Whittaker, she also devised a series of books for children called The Guardian Angels series, based on stories told to her children whenever they were facing a challenging situation. Harry then wrote the books, and they are now being published internationally. Though she brought up her four children mostly in Norfolk in England, in 2015 she fulfilled her dream of buying a remote farmhouse in West Cork, Ireland, which she always felt was her spiritual home, and indeed this was where her last five books were written. Lucinda was diagnosed with cancer in 2017 and died on June 11th 2021, surrounded by her family.