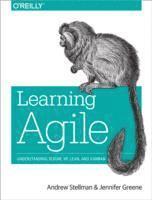 av Andrew Stellman
Häftad Engelska, 2014-11-14
407
Köp
Spara som favorit
Finns även som
Visa alla 2 format & utgåvor
Agile has revolutionized the way teams approach software development, but with dozens of agile methodologies to choose from, the decision to "go agile" can be tricky. This practical book helps you sort it out, first by grounding you in agile's underlying principles, then by describing four specific - and well-used - agile methods: Scrum, extreme programming (XP), Lean, and Kanban. Each method focuses on a different area of development, but they all aim to change your team's mindset - from individuals who simply follow a plan to a cohesive group that makes decisions together. Whether you're considering agile for the first time, or trying it again, you'll learn how to choose a method that best fits your team and your company. Understand the purpose behind agile's core values and principles Learn Scrum's emphasis on project management, self-organization, and collective commitment Focus on software design and architecture with XP practices such as test-first and pair programming Use Lean thinking to empower your team, eliminate waste, and deliver software fast Learn how Kanban's practices help you deliver great software by managing flow Adopt agile practices and principles with an agile coach
Visa hela texten

Andrew Stellman, despite being raised a New Yorker, has lived in Pittsburgh twice. The first time was when he graduated from Carnegie Mellon's School of Computer Science, and then again when he and Jenny were starting their consulting business and writing their first project management book for O'Reilly. When he moved back to his hometown, his first job after college was as a programmer at EMI-Capitol Records--which actually made sense, since he went to LaGuardia High School of Music and Art and the Performing Arts to study cello and jazz bass guitar. He and Jenny first worked together at that same financial software company, where he was managing a team of programmers. He's since managed various teams of software engineers, requirements analysts, and led process improvement efforts. Andrew keeps himself busy eating an enormous amount of string cheese and Middle Eastern desserts, playing music (but video games even more), studying taiji and aikido, having a girlfriend named Lisa, and owing a pomeranian. Jennifer Greene, has spent the past 15 years or so building software for many different kinds of companies. She's worked for small start-ups and some huge companies along the way. She's built software test teams and helped lots of companies diagnose and deal with habitual process problems so that they could build better software. Since her start in software test and process definition, she's branched out into development management and project management. She's currently managing a big development team for a global media company and she's managed just about every aspect of software development through her career. Jennifer founded Stellman & Greene Consulting with Andrew Stellman in 2003, initially to serve the scientific and academic community. They have worked in a wide range of industries including finance, telecommunications, media, non-profit, entertainment, natural language processing, science and academia. They do speaking engagements, provide training on development practices, manage teams, and build software. Together, they've written two highly acclaimed books on project management (Head First PMP and Applied Software Project Management), Head First C#, and most recently just finished up Beautiful Teams.