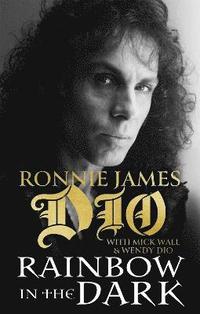 Rainbow in the Dark

av Ronnie James Dio, Mick Wall
(5 röster)
Inbunden Engelska, 2021-07-27
223
Köp
Spara som favorit
Finns även som
Visa alla 2 format & utgåvor
Ronnie James Dio was a heavy metal icon and frontman of three of the best-selling, most influential and famous rock bands in history: Rainbow, Black Sabbath and his own multi-million selling band, Dio. Rainbow in the Dark is a rollercoaster ride through the extraordinary highs and lows of Dio's life, and takes us from his early days as a street gang leader and Doo-wop singer in '60s Vegas through to his breakout success with Rainbow and Black Sabbath in the '70s and the stadiums of US metal in the '80s - ending in Dio's dressing room at Madison Square Garden, in June 1986, at the peak of his worldwide fame with Dio. Tragically Dio passed away from cancer in 2010, but had already begun writing a memoir before his death. Edited by the world-renowned music biographer Mick Wall, with the involvement of Dio's wife of over 35 years and personal manager Wendy Dio, Rainbow in the Dark will honour and feature Dio's never-before-seen original manuscript, while drawing on the extraordinary collection of print and audio interviews with the man himself to produce a vivid, raw and faithful portrait of one of the world's greatest ever rock legends.
Visa hela texten

Remarkable life story . . . this magical metal memoir is a must have for fans of the legend * Hot Press * Solid read * Record Collector * Immensely readable * Classic Rock *

Ronnie Dio (1942-2010) was the legendary frontman of three of the best-selling, rock bands in history: Rainbow, Black Sabbath and Dio. Mick Wall worked as Ronnie's London-based publicity agent after he joined Black Sabbath in 1980. And again, in the mid-90s, when Ronnie was fronting his own band, Dio. Mick also wrote about and interviewed Ronnie extensively as a journalist, TV and radio presenter from 1980 for 30 years. He is the author of Black Sabbath: Symptom of the Universe.