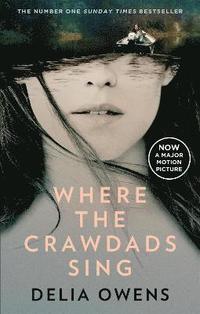 Where the Crawdads Sing

av Delia Owens
Häftad Engelska, 2022-06-28
127
Köp
Spara som favorit
Kan levereras innan julafton!
Finns även som
Visa alla 8 format & utgåvor
OVER 12 MILLION COPIES SOLD WORLDWIDE NOW A MAJOR MOTION PICTURE A NUMBER ONE NEW YORK TIMES BESTSELLER For years, rumours of the 'Marsh Girl' have haunted Barkley Cove, a quiet town on the North Carolina coast. So in late 1969, when handsome Chase Andrews is found dead, the locals immediately suspect Kya Clark, the so-called Marsh Girl. But Kya is not what they say. Sensitive and intelligent, she has survived for years alone in the marsh that she calls home, finding friends in the gulls and lessons in the sand. Then the time comes when she yearns to be touched and loved. When two young men from town become intrigued by her wild beauty, Kya opens herself to a new life - until the unthinkable happens. 'Unforgettable . . . as engrossing as it is moving' Daily Mail 'I can't even express how much I love this book!' Reese Witherspoon '[It] will reach a huge audience though the writer's old-fashioned talents for compelling character, plotting and landscape description' Guardian 'Writing that takes your breath away' The Times
Visa hela texten

A painfully beautiful first novel that is at once a murder mystery, a coming-of-age narrative and a celebration of nature . . . Owens here surveys the desolate marshlands of the North Carolina coast through the eyes of an abandoned child. And in her isolation that child makes us open our own eyes to the secret wonders-and dangers-of her private world * New York Times Book Review * Part murder-mystery, part coming-of-age novel, its evocation of the marshland and its inhabitants is as unforgettable as Kya herself. A story of loneliness, survival and love that's as engrossing as it is moving * Daily Mail * For a debut the prose is impressively accomplished . . . A Hollywood film seems inevitable. Yet it will be hard to match on screen the delicacy of Owens's exploration of the natural world. Kya and her magical little world are a rare achievement * The Times * Kya is a compelling character, Owen's descriptive prose is lushly impressive, and the twist in the narrative's tail is neat * Sunday Times Culture * Owens combines high tension with precise detail about how people dress, sound, live and eat - the case studies in her book are both human and natural . . . Surprise bestsellers are often works that chime with the times. Though set in the 1950s and 60s, Where the Crawdads Sing is, in its treatment of racial and social division and the fragile complexities of nature, obviously relevant to contemporary politics and ecology. But these themes will reach a huge audience though the writer's old-fashioned talents for compelling character, plotting and landscape description * the Guardian * For sheer escapism pick up Where The Crawdads Sing . . . there is writing that takes your breath away * The Times (separate review) * All is not as it seems in this heartbreaking coming-of-age bestseller * The i newspaper * An Amazon Best Book of August 2018: This novel has a mystery at its core, but it can be read on a variety of levels. There is great nature writing; there is coming of age; and there is literature. Crawdads is a story lovingly told-one that takes its time in developing its characters and setting, and in developing the story. You'll want to relax and take your time as well, and when you're done you will want to talk about it with another reader. * Chris Schluep, Amazon Book Review * Unsettling and tinged with sadness, yet astonishingly fresh, powerful and mesmerising - with a surprising ending that will haunt you. I couldn't put it down * The Lady * The strength of the story comes from the sympathetic portrait of its heroine who cannot fail to captivate, right up until the surprising end * UK Press Association and Independent I * Steeped in the rhythms and shadows of the coastal marshes of North Carolina's Outer Banks, this fierce and hauntingly beautiful novel centers on...Kya's heartbreaking story of learning to trust human connections, intertwine[d] with a gripping murder mystery, revealing savage truths. An astonishing debut. * People * Unsettling and tinged with sadness, yet astonishingly fresh, powerful and mesmerising - with a surprising ending that will haunt you. I couldn't put it down * The Lady * This lush mystery is perfect for fans of Barbara Kingsolver * Bustle * A nature-infused romance with a killer twist * Refinery29 * Both a coming-of-age story and a mysterious account of a murder investigation told from the perspective of a young girl...Through Kya's story, Owens explores how isolation affects human behavior, and the deep effect that rejection can have on our lives * Vanity Fair * Heart-wrenching...A fresh exploration of isolation and nature from a female perspective along with a compelling love story. * Entertainment Weekly * A lush debut novel, Owens delivers her mystery wrapped in gorgeous, lyrical prose. It's clear she's from this place-the land of the southern coasts, but also the emotional terrain-you can feel it in the pages. A magnificent achievement, ambitious, credible and very timely * Alexandra Fuller,

Delia Owens is the co-author of three internationally bestselling nonfiction books about her life as a wildlife scientist in Africa including Cry of the Kalahari. She has won the John Burroughs Award for Nature Writing and has been published in Nature, The African Journal of Ecology, and many others. She currently lives in Idaho. Where the Crawdads Sing is her first novel.